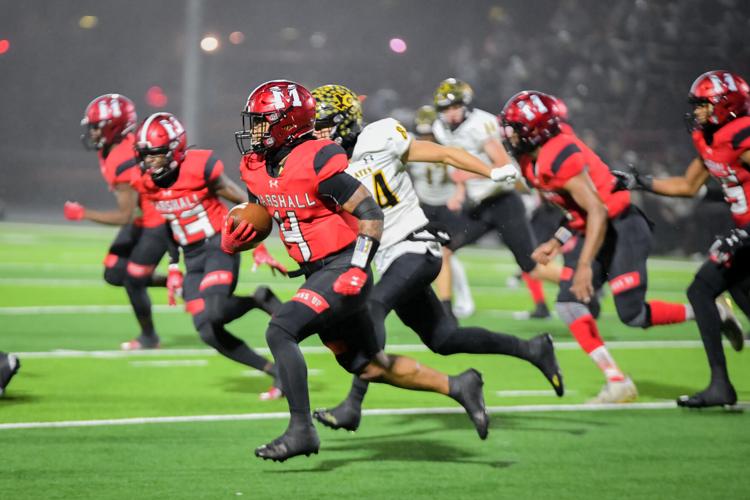 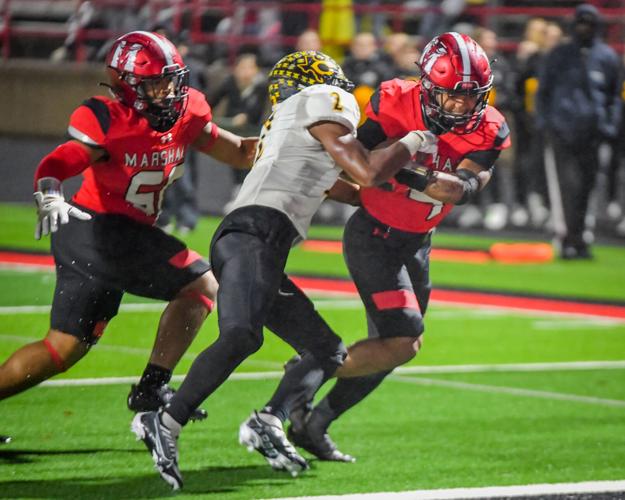 Marshall RB No. 4 J.Q. Davis drags a Crandall Pirate defender into the end zone for a Maverick Touchdown. 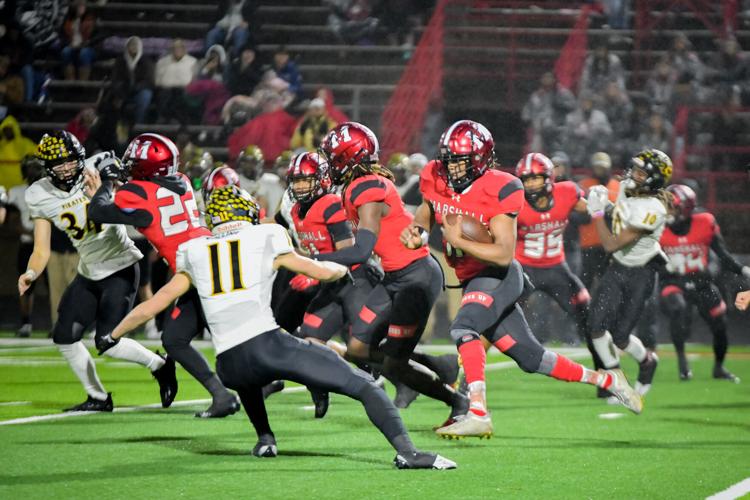 Byrd Robinson slips through the line for a big gain for the Mavs against Crandall.

Marshall RB No. 4 J.Q. Davis drags a Crandall Pirate defender into the end zone for a Maverick Touchdown.

Byrd Robinson slips through the line for a big gain for the Mavs against Crandall.

The clock ran down on the Mavericks’ football season.

In one of the most incredible and dramatic high school football games you will ever see, Marshall ran out of time at the Pirates’ one-yard line, losing the game 47-48 and ending Marshall’s postseason run on Friday.

The Mavericks conclude their 2022 season with a 6-5 record, while the Pirates will move on to face Midlothian Heritage in the next round of the playoffs.

The Mavs made sure to waste no time early on in Friday’s game, giving the ball to No. 11 Davernious Robinson to rush the ball 38 yards into the end zone for the first touchdown of the game on their first drive.

The Pirates matched that pace when Luke Moffitt, after rushing it himself for a couple of plays, passed the ball 16 yards to Samuel Omosigho for a touchdown to even up the score.

Crandall continued to frustrate Marshall’s defense by consistently gaining ground. The Mavericks tried to keep up with a pair of touchdowns by J.Q. Davis, however, with only 15 seconds left until half time, Moffitt made a 38-yard pass to Omosigho — who, despite having three Mavericks on him trying to drag him down, made it into the end zone, making the score 41-27 Crandall.

Marshall is not a team to give up easily. After the half-time show, they got on the field looking like a new team. Crandall did not score once in the third quarter. Mavericks RB J.Q. Davis rushed his heart out, scoring three touchdowns back-to-back and giving Marshall a 47-41 lead in the fourth quarter.

Crandall stayed in the game by converting a 4th and 10 at their 44-yard line, with Moffitt tossing an 11-yard touchdown pass later that drive to put them ahead 48-47 with only two minutes left on the clock.

It all came down to one last Mavericks drive. They were looking good, implementing their tried and true strategy with Davis leading the charge. Marshall managed to get on the nine-yard line with less than 15 seconds left in the game. They were at the one-yard line when the clock ran down on their football season, devastating the Mavericks fans in attendance.

During this game, Marshall did what they know best, which is give the ball to Davis and methodically get the ball down the field with consecutive short rushes. Coming into this game, Davis had 1,735 rushing yards and was only fifth in his district in that statistic. Marshall, coming from a rush-heavy district, set out to test Crandall’s ability to adapt — 418 of 498 of their total yards were from rushing.

Despite the cold and misty conditions, Davis was making the Crandall defense sweat all game with his tenacious effort. About half of the Maverick’s rushing yards came from Davis. He carried the ball 39 times and rushed for 236 yards, 6.05 yards per attempt. He scored five touchdowns.

Crandall leaned heavily on their QB Luke Moffitt to mix it up. Between making huge passes or faking a pass and rushing it himself, Moffitt completed 14 out of 25 attempted passes, with a total of 324 yards, six passing touchdowns and one rushing touchdown. His favorite receivers were Omosigho and Josh Smith, who both got it three times and scored twice.

Despite the devastating loss and end of their season, Mavericks Coach Jack Alvarez made sure his guys knew how proud he was of them.

“I’m proud of my kids and how hard they played,” said Alvarez. “We played our butts off.”