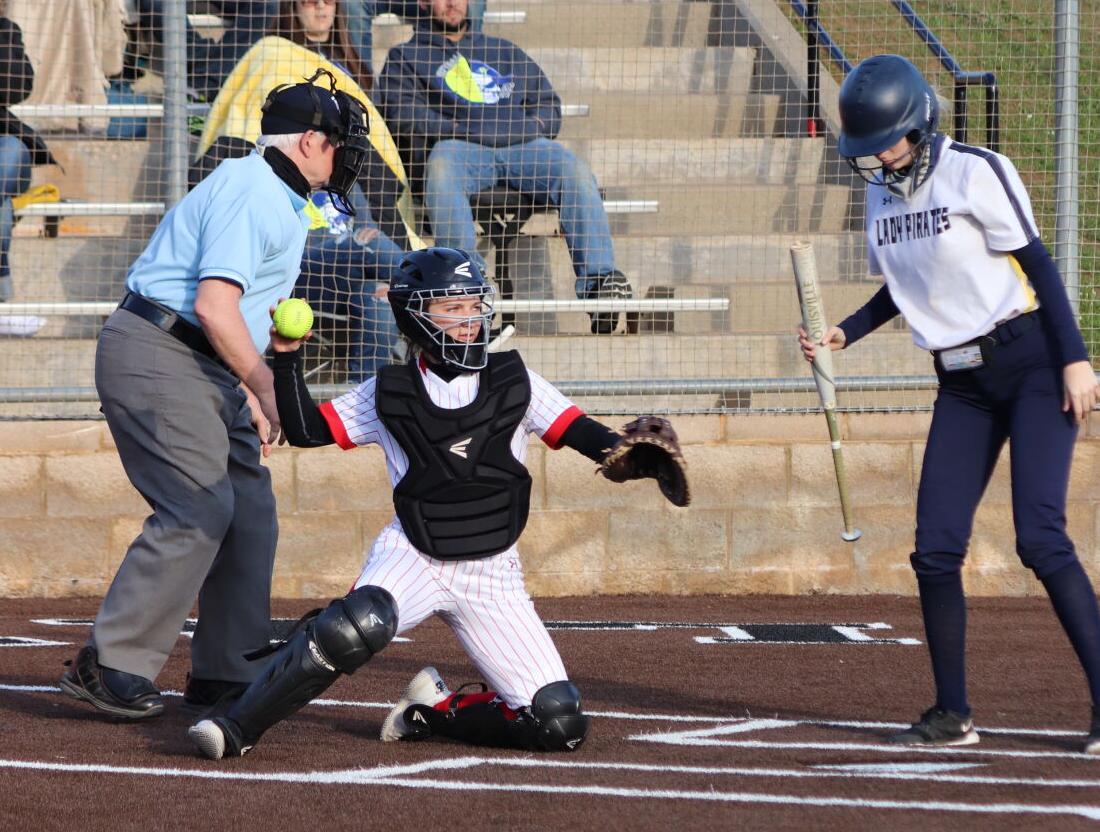 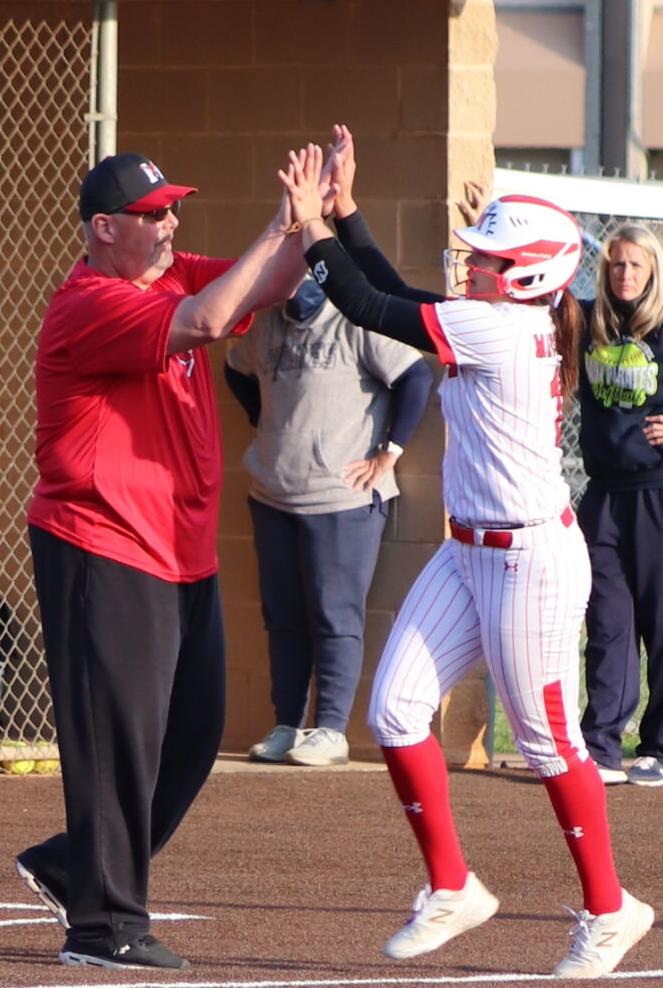 Marshall’s Adriana Vences high fives coach Brent Achorn as she rounds third after hitting one of her two home runs against Pine Tree.

Marshall’s Adriana Vences high fives coach Brent Achorn as she rounds third after hitting one of her two home runs against Pine Tree.

Marshall’s Nana Vences went 4-for-4 with a grand slam and nine RBI from the plate and pitched a no-hitter to earn the win from the circle where she struck out five batters in an effort to help the Lady Mavs sink the Lady Pirates in a commanding 24-0 win.

Marshall now holds an overall record of 10-5 and a district record of 2-2. Pine Tree is now 1-14 overall and 0-4 against district opponents.

“We’ve been working on our hitting quite a bit and working on our technique on hitting so it was a confidence builder for the girls,” Achorn offered. “We need that though. We need some confidence.”

Vences threw her first two strikeouts in the top of the first to turn it over the Lady Mavs’ bats. Truelove singled with one out in the bottom half of the inning.

She then advanced to third when Ellenburg reached second on a two-base error. Vences brought them both home on a two-run homer over the right-field wall to give the Lady Mavs a 3-0 lead. Roberson sent the ball sailing over the head of the centerfielder as the ball hit the wall, sending Roberson to second base for the standup double. Esquivel reached on an error as Roberson took third base. Roberson and Esquivel were brought home when Coleman reached third on an error. Coleman took advantage of a wild pitch and ran home to score Marshall’s sixth run of the game. DeLepaz was walked. Bickerdike got on base with a single and sent DeLepaz to third. A dropped ball in left field allowed Caitlyn Ellenburg to reach base and scored DeLepaz and Bickerdike. Ellenburg scored on an RBI single from Truelove who scored when Ellenburg reached on a base hit. Two more Lady Mavs scored when Roberson reached second. The Lady Mavs finished the inning by scoring 12 runs on seven hits and seven errors to make it a 12-0 game heading into the second inning.

Grimaldo reached on an error and stole second in the top of the second inning. Pickard was walked but Vences closed the inning with another pair of strikeouts to close the inning and keep the Lady Pirates scoreless.

Caitlyn Ellenburg singled into right field to score BIckerdike who had reached on a walk. Caitlyn Ellenburg then stole second before being brought home on an RBI double from Truelove to give Marshall a 14-0 lead. Emily Ellenburg was walked. The two runners were brought home on a two-run triple. Vences was brought home when Roberson reached on an error, giving Marshall a 17-0 lead with no outs. Another error allowed Esquivel to reach third as Roberson scored. Esquivel tagged up and scored on a pop fly hit by Coleman. Another walk loaded the bases for Emily Ellenburg whose RBI single scored DeLepaz. Bases remained loaded when Vences stepped up to the plate as sent the first pitch over the left-centerfield wall for the grand slam, spreading the Lady Mavs’ to 24-0.

Emily Ellenburg entered the circle at the start of the fourth inning where she threw two strikeouts and forced the Lady Pirates to go three up, three down for the second straight inning. She then pitched the fifth inning where added three more strikeouts, making it five straight to close the inning as the Lady Mavs sealed up the 24-0 win.

Marshall is slated to return to action Tuesday when they travel to Sulphur Springs.