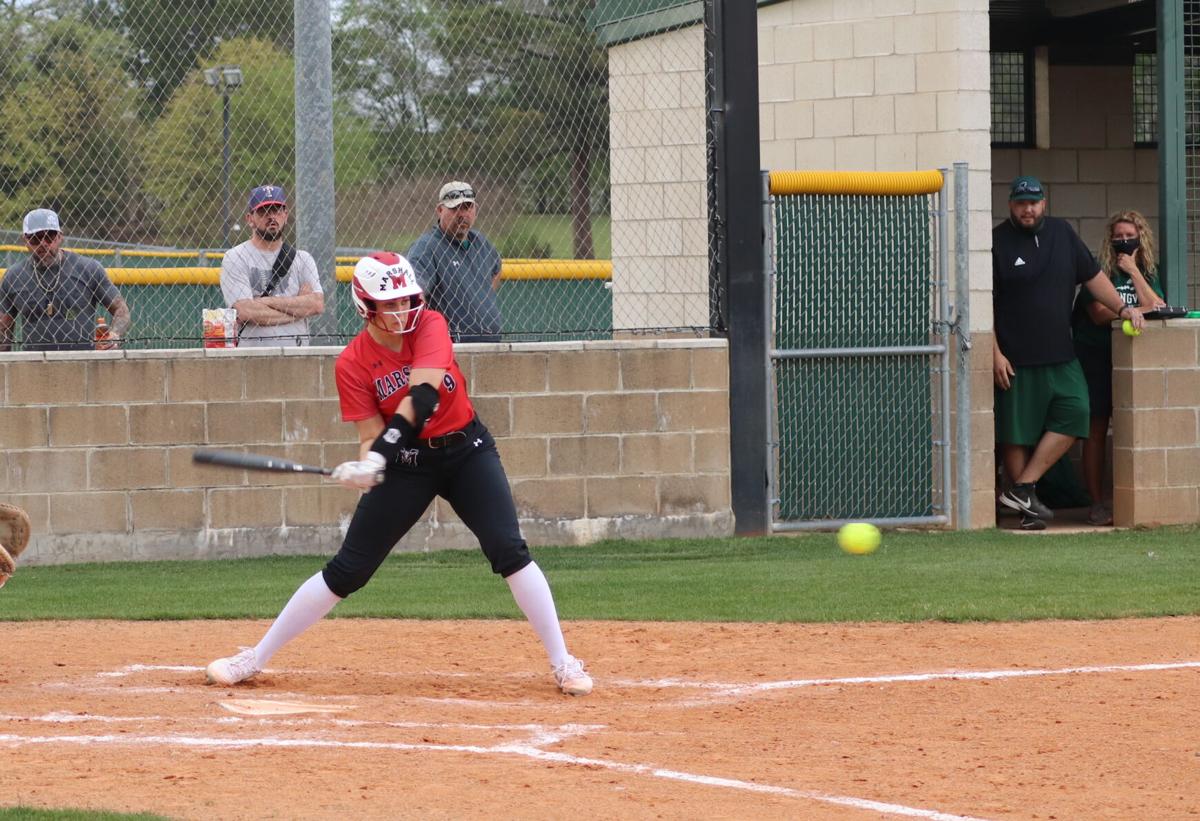 Marshall’s Emily Ellenburg takes a cut at a pitch during the Lady Mavericks’ game against Longview on Tuesday. (Courtney Hague/News Messenger photo) 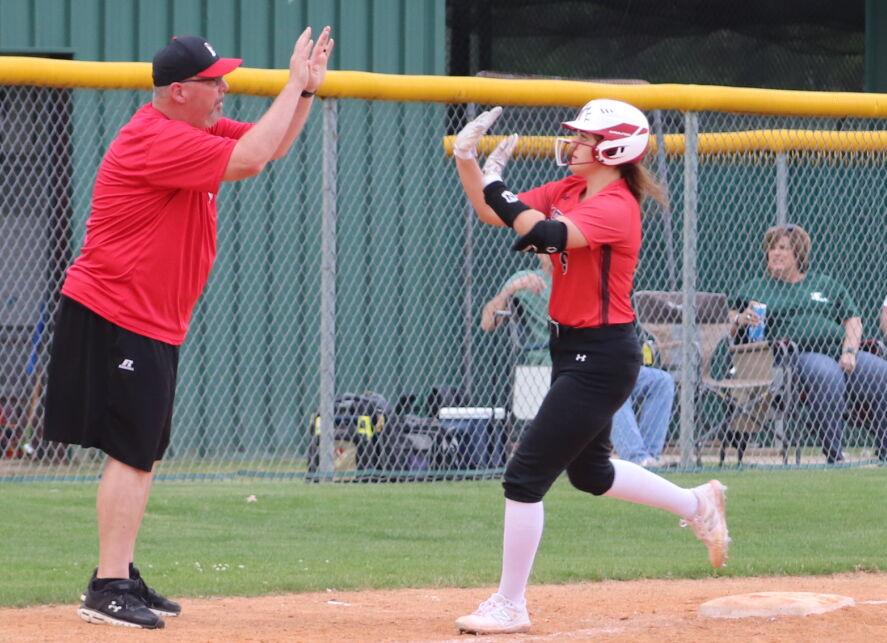 Marshall’s Emily Ellenburg is congratulated by head coach Brent Achorn after belting a home run against Longview on Tuesday. 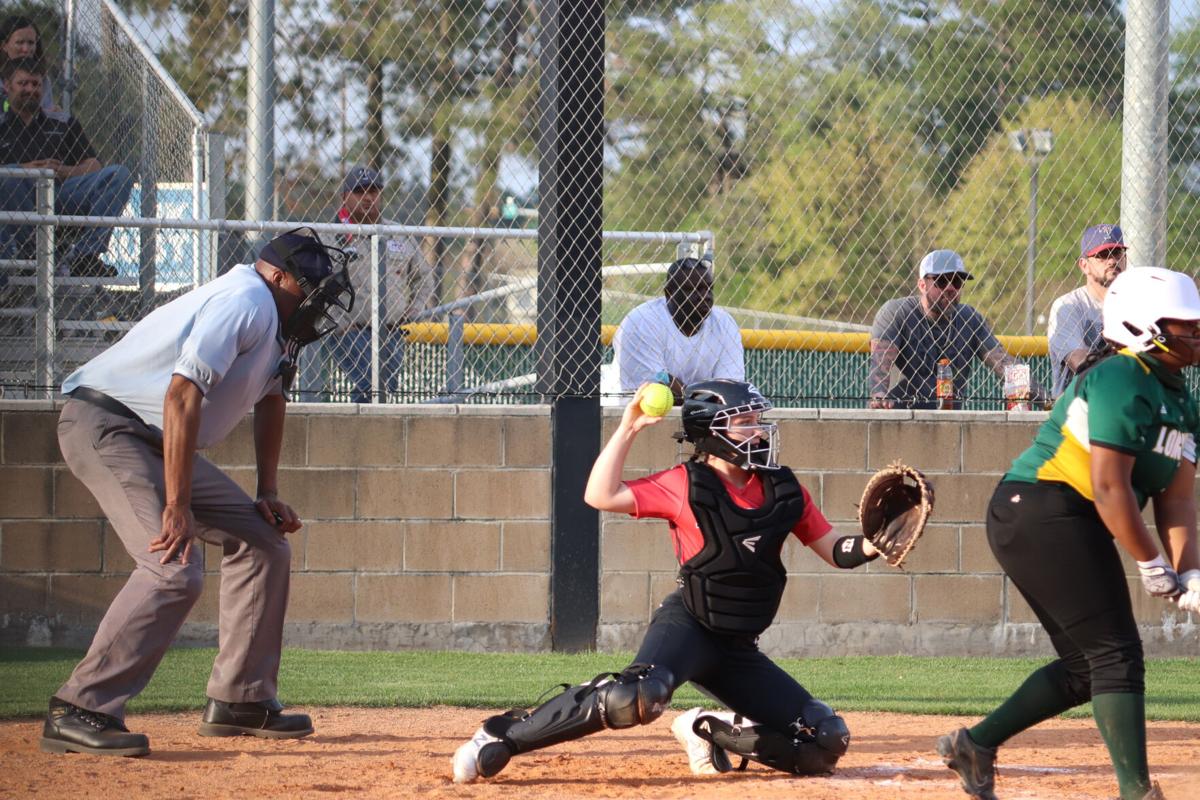 Marshall’s Emily Ellenburg takes a cut at a pitch during the Lady Mavericks’ game against Longview on Tuesday. (Courtney Hague/News Messenger photo)

Marshall’s Emily Ellenburg is congratulated by head coach Brent Achorn after belting a home run against Longview on Tuesday.

LONGVIEW – Marshall’s Nana Vences pitched a complete seven-inning game where she allowed three runs on eight hits, one error, six walks and three strikeouts as she helped lead her Lady Mavs to a 4-3 victory on the road against the Longview Lady Lobos Tuesday night.

Marshall now holds an overall record of 11-7 and a district record of 3-4 while Longview is 1-6 in district play.

“Nana’s pitching,” Marshall head coach Brent Achorn said when asked what the key was to a Lady Mavs win. “We played some good defense. We had one error where the girl to first base. Our sticks are cold. We’ve got to get our sticks going. I’m proud of our kids for battling. They give me a heart attack but I’m proud of them for battling. That kind of keeps us in the mix for the playoffs but we’ve got a long road ahead.”

Emily Ellenburg homered, was walked twice, had two RBI and totaled two runs on the night. Maggie Truelove was 2-for-4 with one run and one RBI. Caitlyn Ellenburg had a double and one run. Vences was 2-for-3 with one RBI.

Kei Lister singled, reached on two walks and scored all three of Longview’s runs. Reagan Fleet was 1-for-4. Madison Jones had two hits and three RBI. River Hulsey was 3-for-3 with one walk. Betsy Martinez was 1-for-3. Tia Taylor reached on one hit and two walks. Fleet pitched the first inning where she allowed four runs on five hits and struck out five batters. Rios came in and pitched for the remainder of the game as she allowed no runs on one hit and struck out 10 batters.

Truelove reached with on a base hit in the top of the first. A batter later, the count was full when Emily Ellenburg launched a home run over the centerfield wall to bring Truelove home and give the Lady Mavs a 2-0 lead. The bottom half of the inning saw Lister reach on a single before being brought home on an RBI double from Jones. That made the score 2-1 after one inning.

Marshall went three up, three down in the top of the second as Fleet struck out all three batters to turn it over to the Lady Lobos’ bats. The bottom of the second saw Martinez single and Taylor reach on a walk. Thompson then reached on a fielder’s choice as Taylor was out at second for out No. 2. The final out came on a fly ball to close the inning with Marshall still leading 2-1.

Caitlyn Ellenburg led off the third inning with a standup double before stealing third. She was brought home on an RBI single from Truelove. Truelove was called out at third but Emily Ellenburg reached on a walk. She was brought home on an RBI base hit from Vences who was tagged out trying to turn a single into a double. DeLaPaz was walked with two outs on the board but the Lady Lobos got the third out to close the top half of the inning. Lister reached on a walk to lead off the bottom half. She advanced to third when Fleet singled. Jones was grounded to first but scored Lister. Hulsey reached on a walk and that put runners on the corners with one out. Fleet was tagged out at home for the second out as Fuller reached on a fielder’s choice. The Lady Mavs got the third out to keep the Lady Lobos from scoring, making it a 4-2 ballgame heading into the fourth inning.

Marshall went three up, three down in the top of the fourth as Fleet added another pair of strikeouts. Taylor led off the bottom half with a single before advancing to third on a sacrifice bunt. Taylor made her way to third on another groundout. A popup behind home plate was caught by Aly Roberson for the final out of the inning as the score remained 4-2 in favor of Marshall.

With two outs in the top of the fifth, Emily Ellenburg was walked and took second when Vences singled but a strikeout ended the top of the inning. Jones and Hulsey both singled to put two runners on with one out. Fuller reached on a fielder’s choice as the Lady Mavs got the second out of the inning at third base. The third out came just a few pitches later on a 4-3 groundout, forcing the Lady Lobos to leave two runners on base. The score remained 4-2.

Marshall went three up, three down again in the top of the sixth, all three of which were strikeouts. The bottom half saw Taylor reach on a walk but she was tagged out for the final out of the inning going for third as the Lady Lobos continued trail by two runs.

Marshall went three up, three down on three more strikeouts. That turned it over to Longview for one last chance to tie or win the game. Lister led off the bottom of the seventh with a walk and stole second before advancing to third on a sacrifice grounder. She then ran home on an RBI grounder from Jones to put the tying run at the plate. Hulsey reached on a two-out single but was tagged out going for second for the final out of the night as the Lady Mavs sealed up the 4-3 win.

The Lady Mavs are slated to return to action Thursday when they play host to Mount Pleasant. The Lady Lobos will be at Pine Tree.