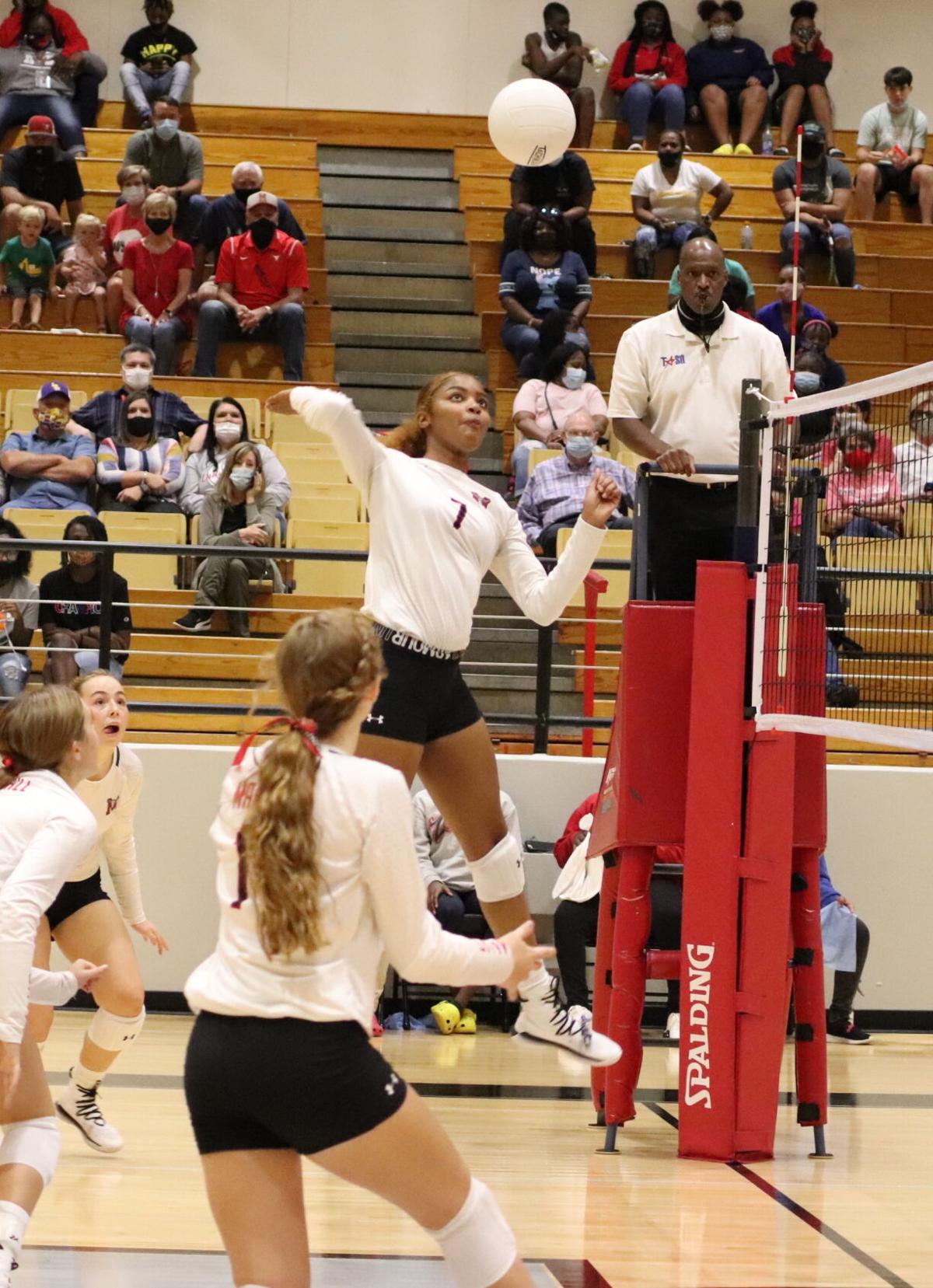 Marshall’s Jordan Terry goes up for the hit during Tuesday’s match. 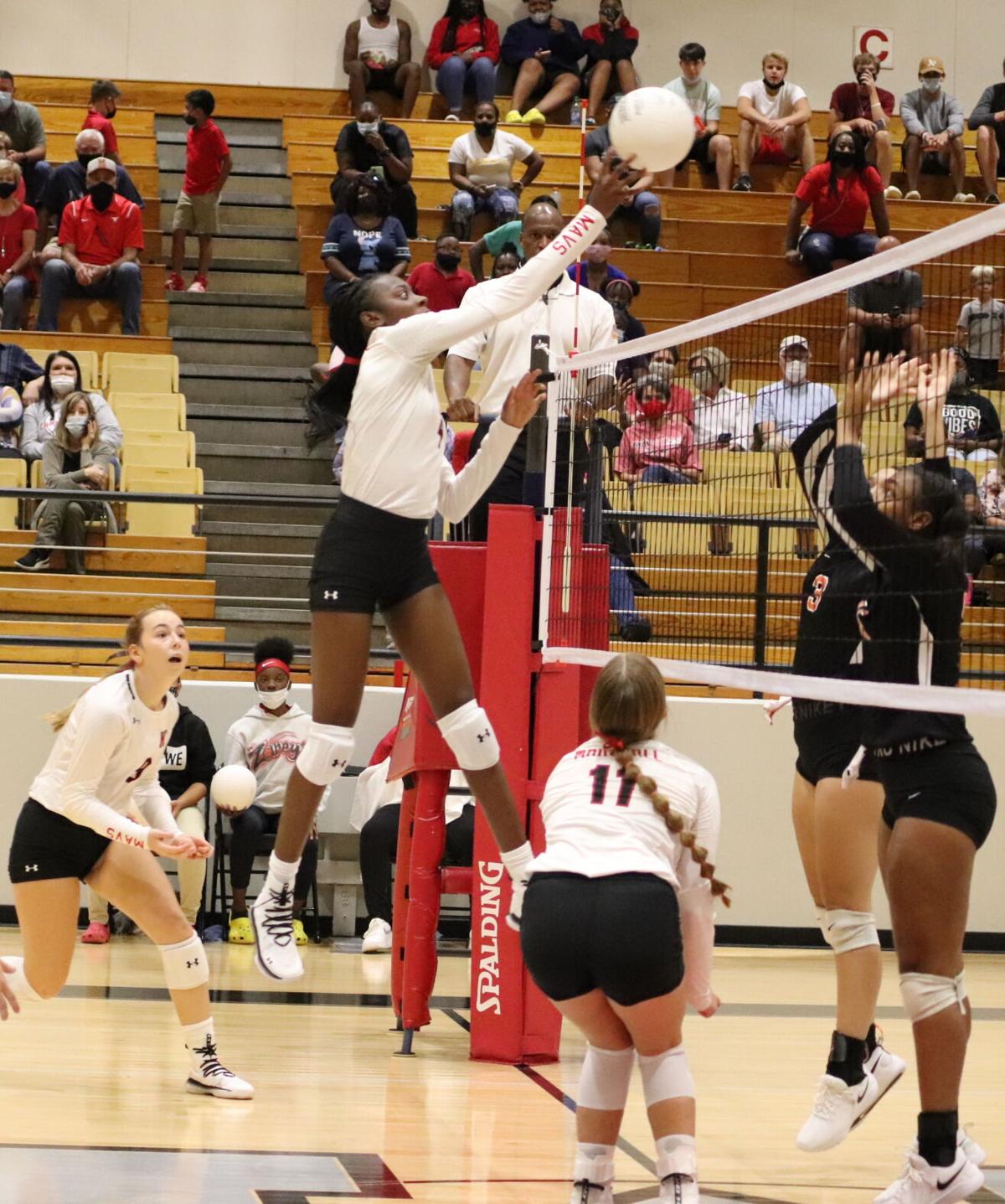 Mahogani Wilson and her Lady Mavs opened the season against Gilmer Tuesday night but we swept by the Lady Buckeyes.

Marshall’s Jordan Terry goes up for the hit during Tuesday’s match.

Mahogani Wilson and her Lady Mavs opened the season against Gilmer Tuesday night but we swept by the Lady Buckeyes.

Marshall’s volleyball jumped out to an early lead in the first set of its season opener Tuesday evening but the Lady Mavs were unable to hold onto that lead as they were swept by the Gilmer Lady Buckeyes in three-games with scores of 23-25, 19-25, 16-25.

With the loss, Marshall is 0-1 on the season while Gilmer now holds an overall record of 9-4. Mahogani Wilson had three blocks on the night while Isabella Emery had nine digs and Caitlyn Ellenburg had 10 assists.

The first point of the night went to the Lady Buckeyes before the next two went to Marshall to give the Lady Mavs their first lead of the season before building a 9-4 lead. Gilmer had added a couple more points before Wilson slammed the ball down for a kill to give Marshall a 10-6 lead. The Lady Mavs continued to pour it on as a 13-6 lead forced Gilmer to call its first timeout of the night. The next five points following the timeout went in favor of Gilmer to put the Lady Buckeyes within two. A point from Emily Ellenburg ended the streak and started a new one in favor of Marshall as the Lady Mavs led 17-11.

Marshall continued adding to its leading, jumping in front 22-14 before Gilmer cut it to 22-18. The Lady Buckeyes cut it closer than the Lady Mavs preferred, making the score 23-21 and forced Marshall to call timeout. Marshall was unable to return the first serve after the timeout and a hit into the net resulted in Gilmer tying the game before stealing the next two points and the 25-23 win.

Game two saw Gilmer score the first four points. Marshall found itself down 6-1 but chipped away at its deficit and cut it down to 5-7. The Lady Buckeyes gave themselves a little more separation by building its lead back to five. An ace from Emery was followed by a kill from Madyson Tate and that led to 13-7 Gilmer lead. Three straight points went Marshall’s way before a serve went out of bounds to make the score 14-10, Gilmer.

Marshall cut its deficit down to one point but Gilmer gave itself some breathing room and a 19-14 lead to force Marshall to call timeout. Marshall stole the first two points after the timeout to make it a three-point game but Gilmer found its way to just two points away from winning the second set and forced Marshall to call another timeout with a score of 23-18. Gilmer got the first point after the timeout and that was followed by a Lady Buckeyes serve that landed out of bounds. That only kept the Lady Mavs alive in the set for a moment as Gilmer scored the next point to seal up the 25-19 win.

Unlike in the first two sets, Marshall scored the first point in the third set and added a second before a serve into the net put the Lady Buckeyes on the board. That led to them taking a 3-2 lead. The two teams went back and forth exchanging leads. A kill from Kirsten Waller led to Gilmer taking a 9-5 lead. Wilson had a block at the net that gave her team the next point but the Lady Buckeyes scored the next seven points to take a 16-6 lead and force Marshall to call a timeout. Caityln Ellenburg scored a point before her sister, Emily Ellenburg slammed it down for a kill. Marshall still trailed 16-8 at that point and Gilmer continued to build its lead. Marshall chipped away and added a few points but their deficit was too large in the end as the Gilmer won set three 25-16 to complete the three-game sweep.

Marshall is slated to return to action Friday night on the road against Rusk while Gilmer will be in Troup.