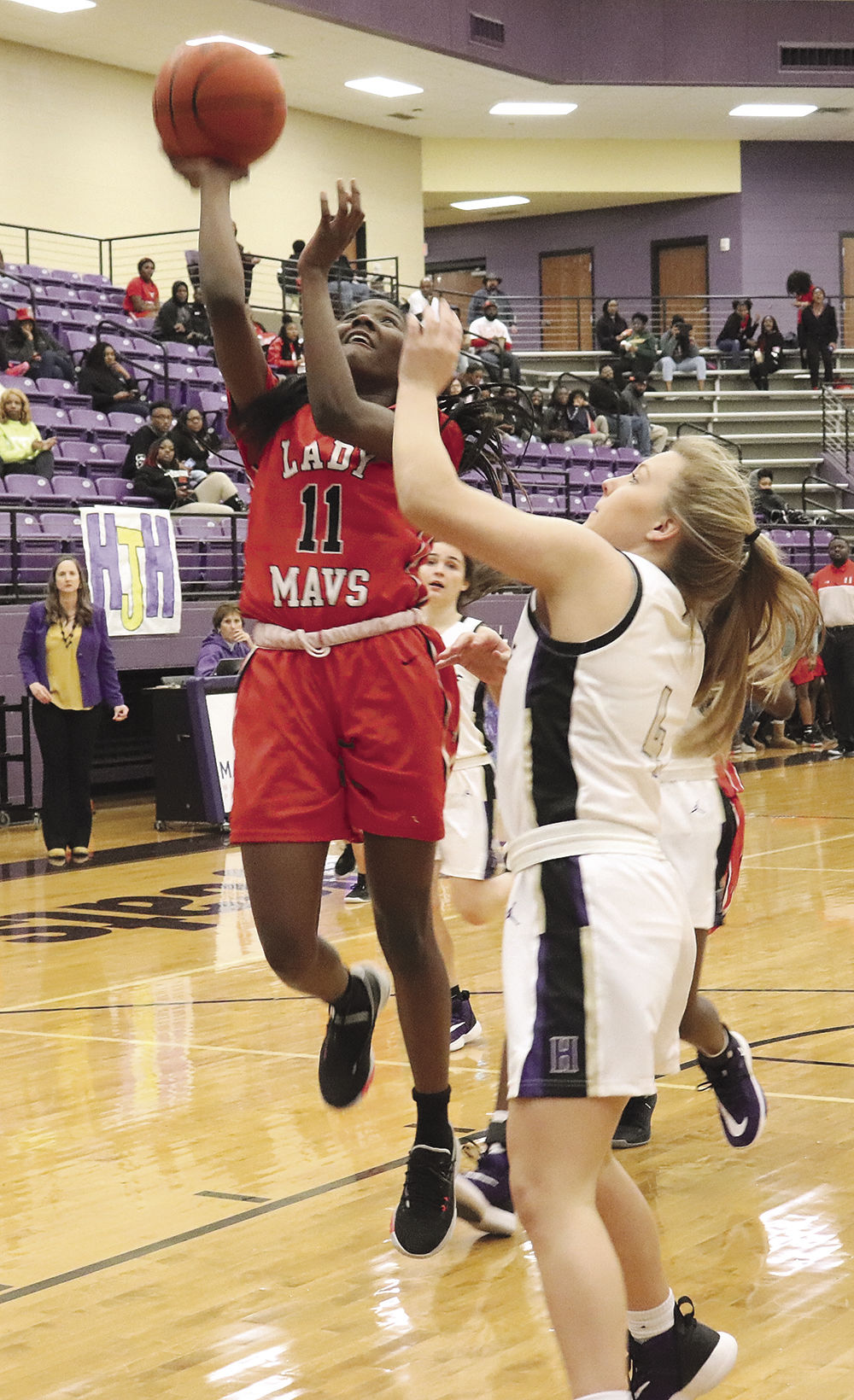 Marshall’s Asia Smith goes to the basket during Tuesday night’s game against Hallsville. 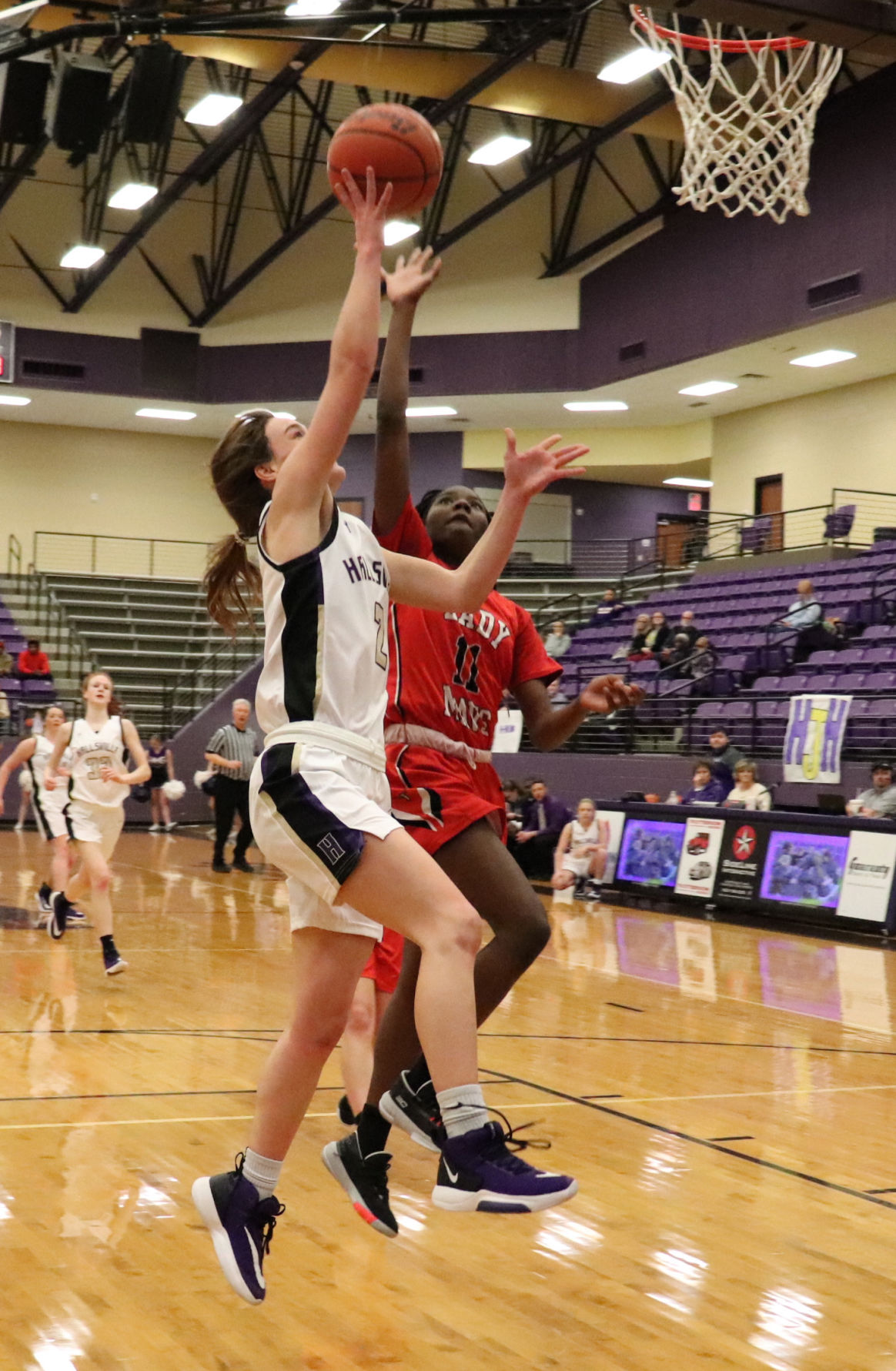 Hallsville's Mallory Pyle goes up for a layup in Tuesday night's game against Marshall.

Marshall’s Asia Smith goes to the basket during Tuesday night’s game against Hallsville.

Hallsville's Mallory Pyle goes up for a layup in Tuesday night's game against Marshall.

HALLSVILLE – Tuesday night saw the Hallsville Ladycats get the senior night it wanted when they defeated the Marshall Lady Mavs 62-45 in the regular-season finale of basketball.

Hallsville advances to 9-5 in district play and will move on to the playoffs. Marshall’s season comes to an end with a final district record of 3-11.

Kelci Wilson led the game in scoring with 21 points. Laikyn Smith was next in line with 13 and Mallory Pyle wasn’t far behind her with 10 points. Baylie Perkins, Cartherine Warford and Olivia Simmons all scored four points on the night. Faith Baliraine scored three and Shamiah Morris finished the night with one point.

Warford scored from down low to put the first points on the board. A Hallsville three was followed by bucket from Fischer to give the Ladycats an early 7-0 lead. Griffin put the Lady Mavs on the scoreboard with a three and Wilson added a two. A bucket from Smith was followed a layup from Griffin to make it a 13-7 score. The Ladycats added another three to make the score 16-7 heading into the second quarter.

The second quarter started with an and-one from Wilson and Perkins added a two. A Marshall three was followed by another two from Wilson, making the score 23-10. Asia Smith came up with a loose ball and took it the other way for a layup. Pyle and Jones exchanged layups and Griffin drained a three to put the Lady Mavs within 10 points. Asia Smith tossed in a bucket to cut Hallsville’s lead to 30-21 and that’s where the two teams went into the locker room for the halftime break.

The first half starte3d with a layup from Pyle before Jones answered with a bucket on the other end of the court. Moments later, Laikyn Smith drained a three to extend Hallsville’s lead to 14. Wilson’s found Laikyn Smith on a no-look pass, making the score 39-23 and forcing Marshall to call timeout with 4:41 left in the third quarter. After the timeout, Griffin drained a three. Wilson went 2-for-2 from the line before Marshall scored six straight points. That made the score 43-32 heading into the fourth quarter.

The Lady Mavs came up with a steal that led to the first points of the fourth quarter to cut their deficit to single digits. Turner added a bucket down low to score the Lady Mavs’ 10th straight point and make it 42-36. Laikyn Smith ended the Lady Mavs’ scoring streak with a three. Griffin then returned the favor of knocking down a shot beyond the arc. Wilson and Laikyn Smith each added a field goal. Pyle came away with a pair of layups. After a bucket from Jones, Baliraine came away with an and-one. Perkins was fouled on a three-point attempt and sent to the line where she when 2-for-3 on free throws, spreading her team’s lead to 62-43. The Lady Mavs added the final bucket of the night to make the final score 62-45.