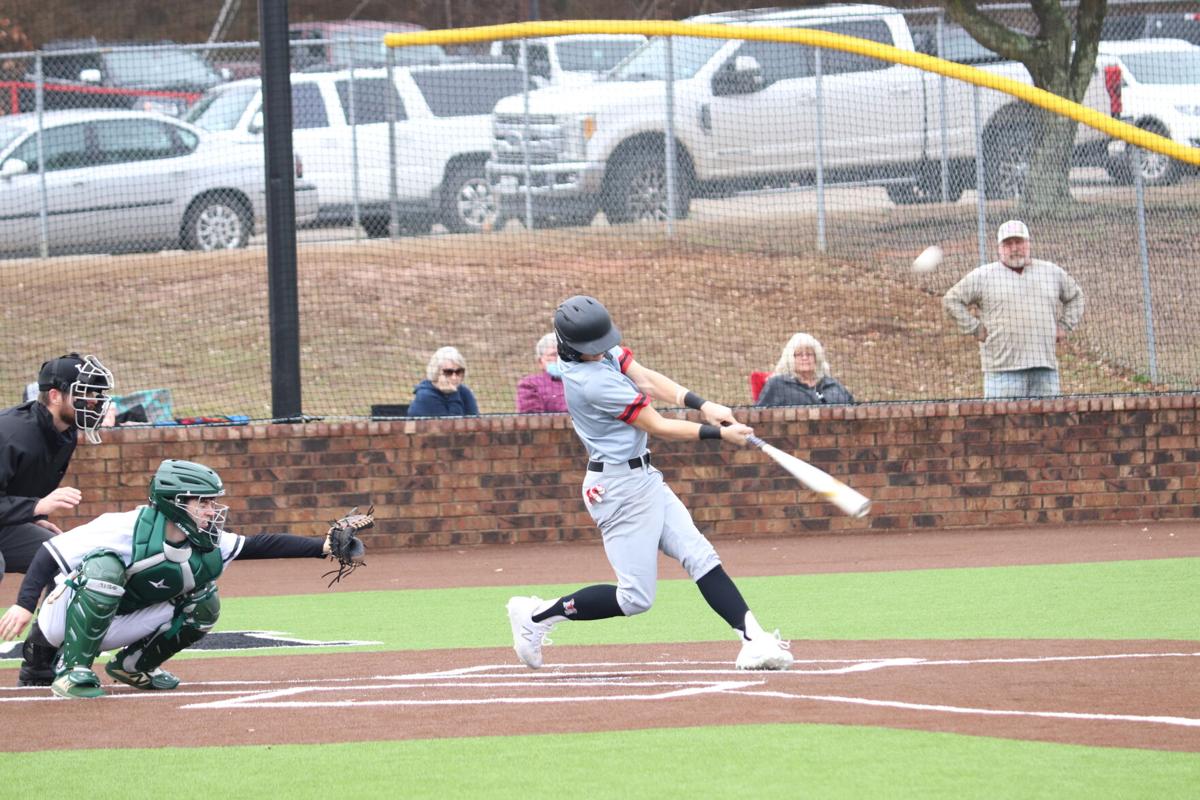 Marshall’s Garrett Cotten connects with a pitch against Harleton on Saturday in Marshall. 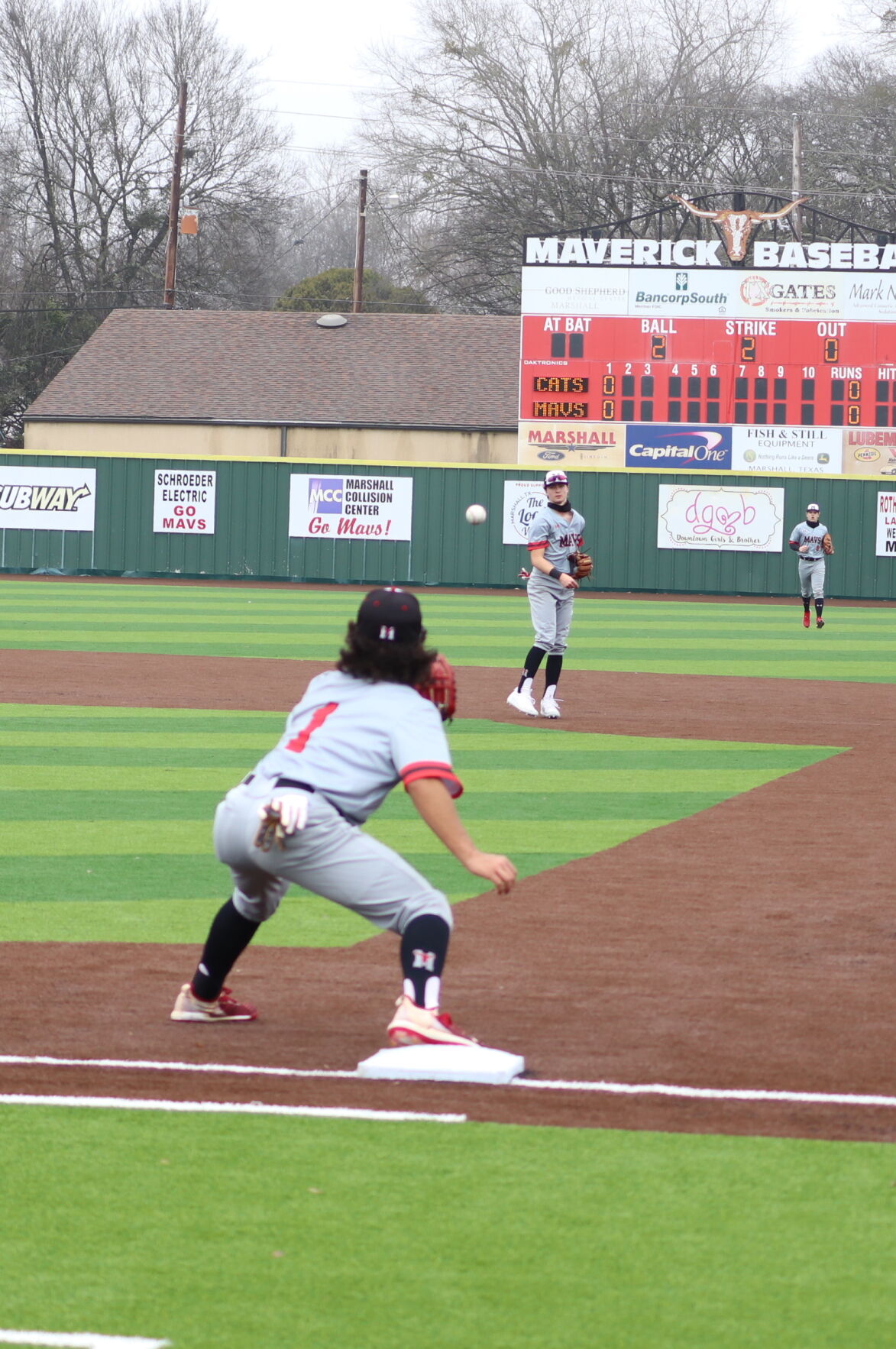 Marshall pitcher Garrett Cotten throws to first baseman Dante Enriquez during a game against Harleton on Saturday in Marshall. 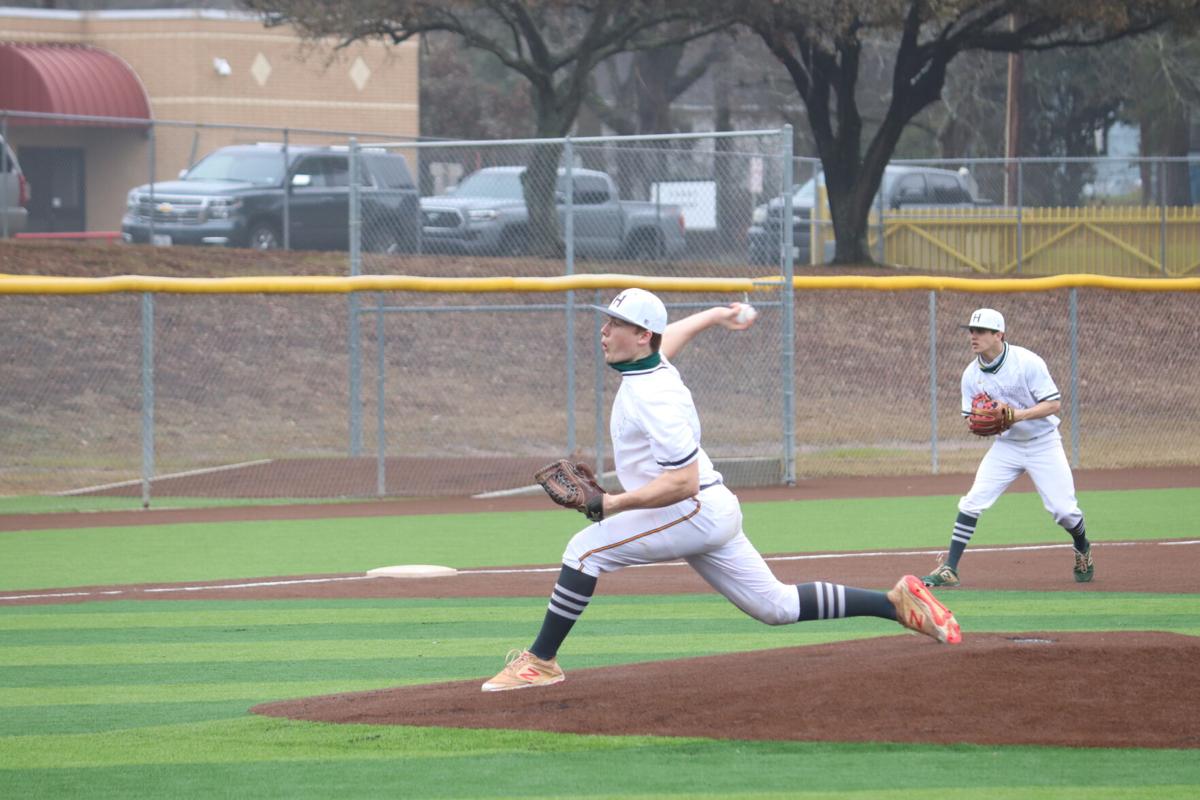 Harleton’s Taber Childs makes a pitch against Marshall on Saturday in Marshall.

Marshall’s Garrett Cotten connects with a pitch against Harleton on Saturday in Marshall.

Marshall pitcher Garrett Cotten throws to first baseman Dante Enriquez during a game against Harleton on Saturday in Marshall.

Harleton’s Taber Childs makes a pitch against Marshall on Saturday in Marshall.

Despite falling behind 4-0 early to Harleton in the Marshall Baseball Classic in a matchup of two Harrison County teams, the Mavericks scored six unanswered runs to defeat the Wildcats 6-4 on Saturday.

“Down 4-0, we haven’t had a lot of success this weekend, especially at the plate,” Marshall head baseball coach Derek Dunaway said. “So that was huge for us. We’ve just been harping to competing every pitch and keep with the process because it’s going to happen and we’ve really been preaching small ball in our aggressive base-running. We’re always going to do that and that really paid off in a couple innings.”

Marshall had six hits on the game. Dallan Shaw went 2-for-3 with on run, one RBI, two stolen bases and one run. Garrett Cotton went 2-for-4 with two a RBI single to seal up the win. Hayden Kelehan finished 1-for-2 with a walk, two stolen bases and one run. Jacob Oden reached on a walk before finding his way round the bases to score one run. Dylan Thurmon reached on a base hit and one error, scoring two runs and finishing the game with 2 RBI. Javarius Mitchell reached on a hit-by-pitch and scored one run. Brayden Robbins singled and reached on a walk before scoring one run. Andrew Phillips went 1-for-3. Kelehan got the win from the mound as he pitched all five innings, allowing four runs on eight hits and striking out four batters.

Harleton’s Jojo Clark finished went 2-for-3. Braden Hopkins was 2-for-2 with one walk and one RBI. Luke Wright went 1-for-3. Taber Childs reached on a hit, a walk and a hit-by-pitch. Nolan Wisdom went 1-of-3 with one RBI and one stolen base. Blake Weaver finished the game by going 1-of-3.

Clark led off the game by beating out the run to first base for the single. He then advanced to third on a sacrifice. Childs was walked before advancing to second to put two runners into scoring position but a groundout to first base ended the top of the first inning.

Jim Weaver took advantage of a passed ball and then took second when Kelehan singled. Both runners advanced into scoring position with two outs before a groundout to first ended the bottom half of the inning

Hopkins singled with two outs in the top of the second. He then stole second but didn’t get any further as Kelehan got his second strikeout of the inning to turn things over to Marshall’s offense.

Robbins singled into shallow right field two batters before Shaw singled. However the second fly ball right field ended the inning and left each team in search of its first run of the game.

The Wildcats got three straight singles to start off the third inning to load the bases. Clark slid into home plate to score off a wild pitch. Drew Stafford reached on a fielder’s choice as Wright was tagged out at home. A sacrifice fly from Sanders gave the Wildcats a two-run lead before an RBI single from Wisdom made the score 3-0. Wisdom scored on an RBI single from Hopkins before the top half of the inning came to a close with the Wildcats leading Mavericks 4-0.

With one out on the board, Kelehan reached on a walk and stole second base. He then advanced to third on a fly ball hit by Jacob Oden. Kelehan was brought home on an RBI single from Thurmon to give the Mavs their first run of the game. Thurmon made his way to third but a strikeout ended the inning and left the Mavs trialing 4-1.

Harleton got one runner on base with a hit-by-pitch but that was all the Mavericks allowed as the inning came to a close with 1-3 grounder.

The fifth inning started with Sanders reaching second base on a two-base error before he took third base before Hopkins got to second on a walk, putting runners on the corners before a groundout to third ended the top of the inning.

The bottom half of the first led off with Oden reaching on a walk before taking second on an error. Thurmon took advantage on another error that allowed him to reach second base and that brought Oden home to tie the game up at 4-4. Henry Roth was hit by a pitch before Phillips reached on a hit to load the bases for Cotton whose two-RBI single scored Thurmon and Roth the final two runs of the game. Because of the time limit, the game ended there as the Mavericks walked away with a 6-4 win.