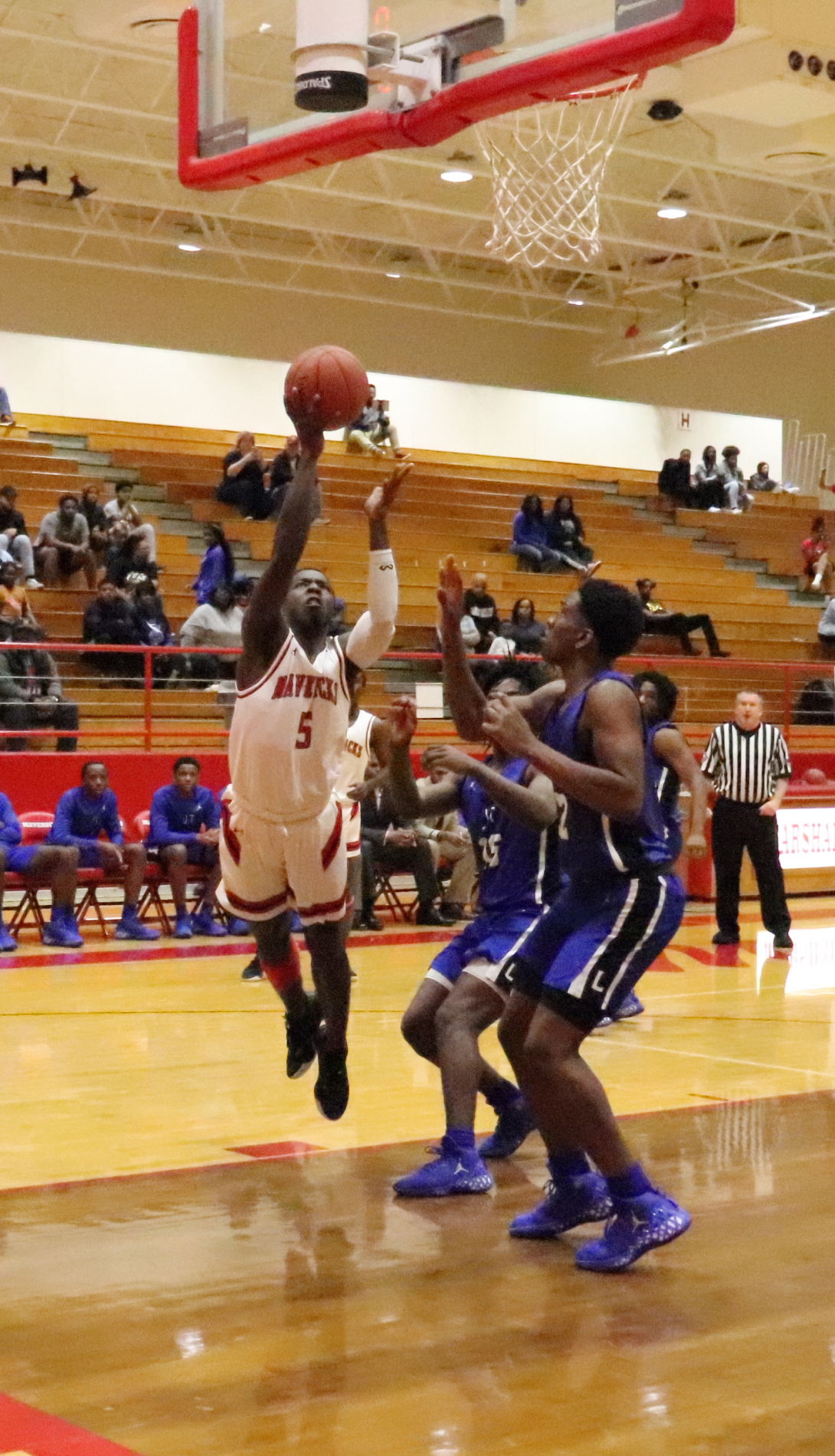 Jaeden Knox led the Mavericks in scoring with 27 points Friday night against the John Tyler Lions. 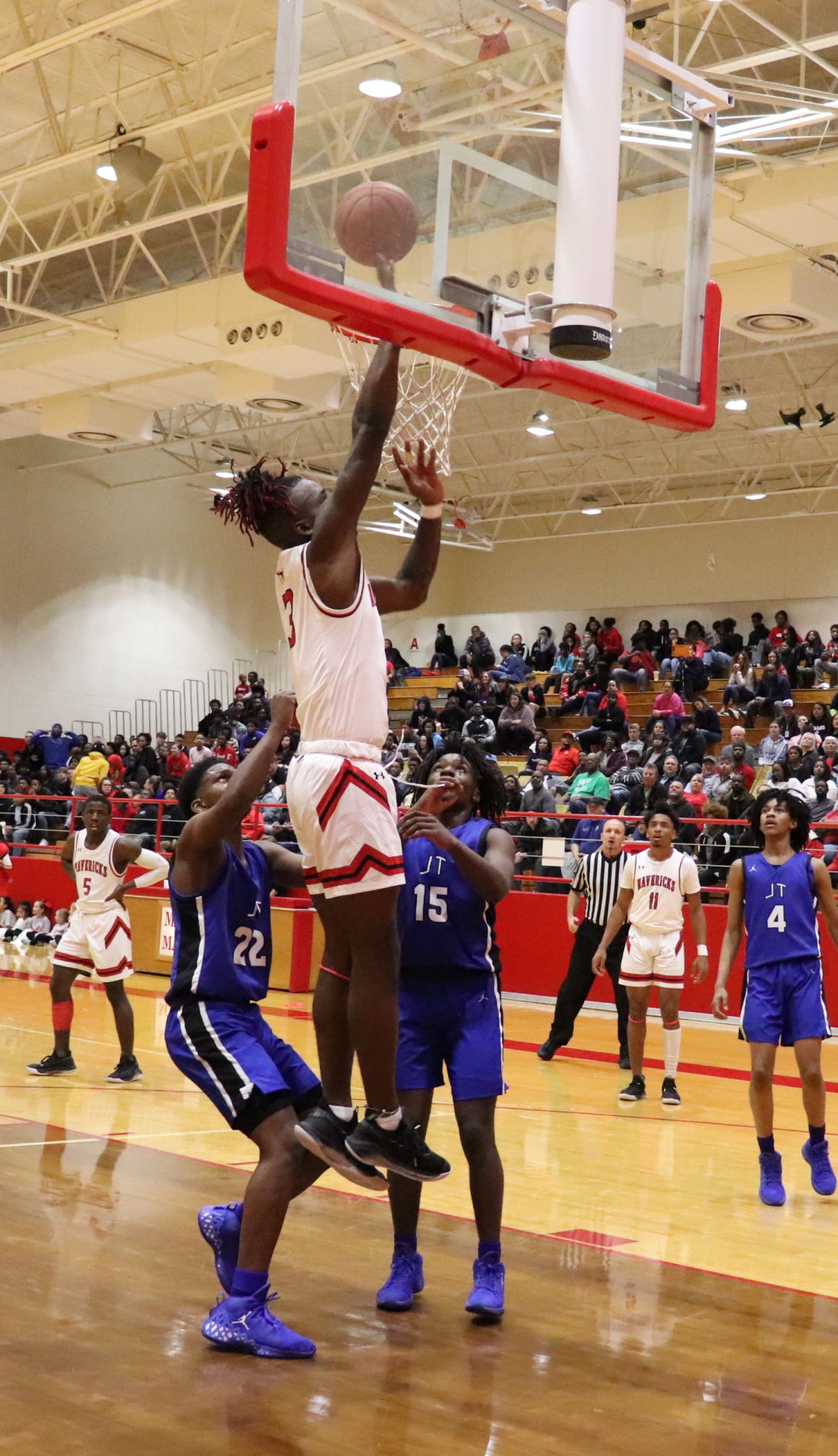 Savion Williams goes up for two in Friday night's game against John Tyler.

Jaeden Knox led the Mavericks in scoring with 27 points Friday night against the John Tyler Lions.

Savion Williams goes up for two in Friday night's game against John Tyler.

Marshall’s boys basketball team remains at the top of its district thanks to Friday night’s 72-60 home win over the John Tyler Lions. Marshall advances to 10-1 in district play where John Tyler falls to 6-5.

Jaeden Knox was the game’s leading scorer with 27 points. Next in line were Chris Leonard who scored 11 points, and James Thomas who came away with 10.

Elijah Thomas led the Lions in scoring with 12 points. Phillip Moore was right behind him with 11 and Ashad Walker scored 10.

Once again, it was back and forth early. Knox scored the first points of the night, but that was followed by a bucket from Moore and another from Jones to give the Lions their first lead of the game.

The lead went back to Marshall after Williams came away with an and-one, but the Lions quickly responded after Moore came up with a three-point play of his own, this one coming on a long shot from behind the arc.

The two teams were knotted up at 11 when a bucket from O’Neal was followed by a pair of buckets from Thomas to make the score 15-11 in favor of John Tyler.

Rawls found Knox for the assist and added a layup to tie it up at 15-15 with just less than two minutes left in the first quarter.

Leonard found Thomas for the assist to put Marshall back in the lead at 17-15. Moore then attacked the basket and banked a shot in off the glass to tie it back up at 17 as the game headed to the second quarter.

Knox knocked down 1-of-2 free throws before coming away with a dunk to give the Mavericks a 20-17 lead. He then made another trip to the foul line where he went 1-of-2 again.

It was deja vu all over again as he followed that up with another dunk, scoring the first six points of the second quarter. That spread Marshall’s lead to 23-17.

A three from Leonard capped off a 7-0 run for the Mavs, giving them a 34-23 lead. The Lions were able to bring the lead back to six with a three from Walker to make the halftime score 38-32.

Moore scored the first points of the second half before Knox came away with a bucket on the other end.

Warren then scored from down low to make it a four-point game, 46-36.

Leonard scored on a layup a possession before he tossed a pass to Williams, who slammed it down for the alley-oop dunk, giving the Mavericks a 44-36 lead.

Thomas then came up with a bucket in the paint to give the Mavericks their first 10-point lead, 46-36.

Moments later, Hill drained a three from in front of his team’s bench, giving the Mavs a 51-38 lead. The third quarter continued at that pace and ended with another three from Walker, this one coming at the buzzer to make the score 57-45 in favor of the Mavericks.

The Lions slowly chipped away at Marshall’s lead as a bucket from O’Neal cut it down to 68-57.

Knox made another trip to the foul line with 55 seconds left to make the score 72-58.

Turner worked his way down low and banked in a shot for what turned out to be the last points of the game, making the final score 72-60.