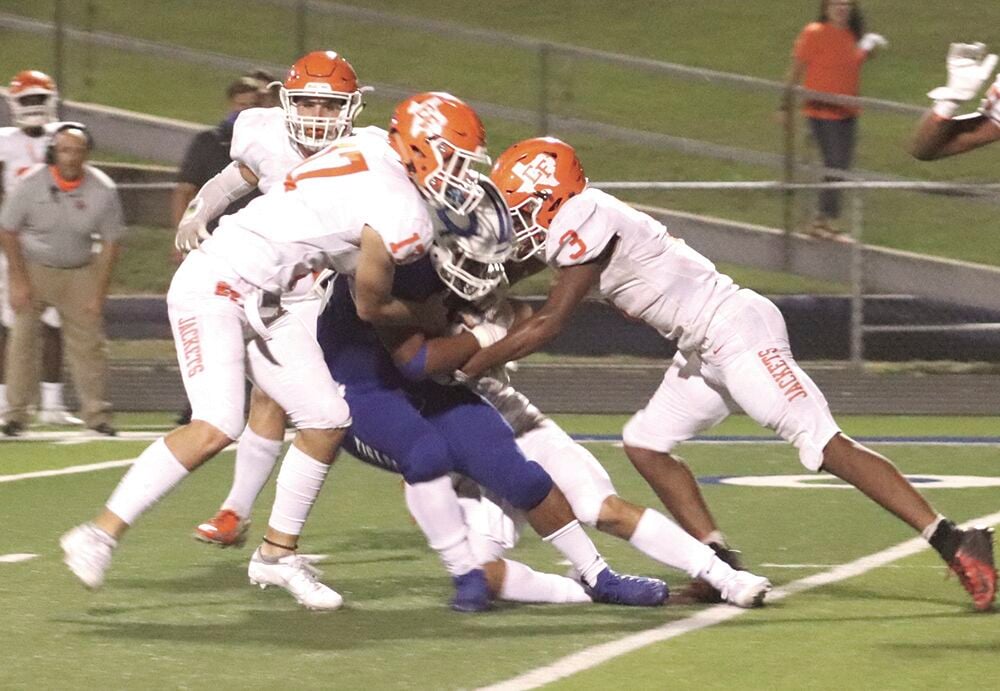 The Elysian Fields defense swarms over a Daingerfield ball carrier. 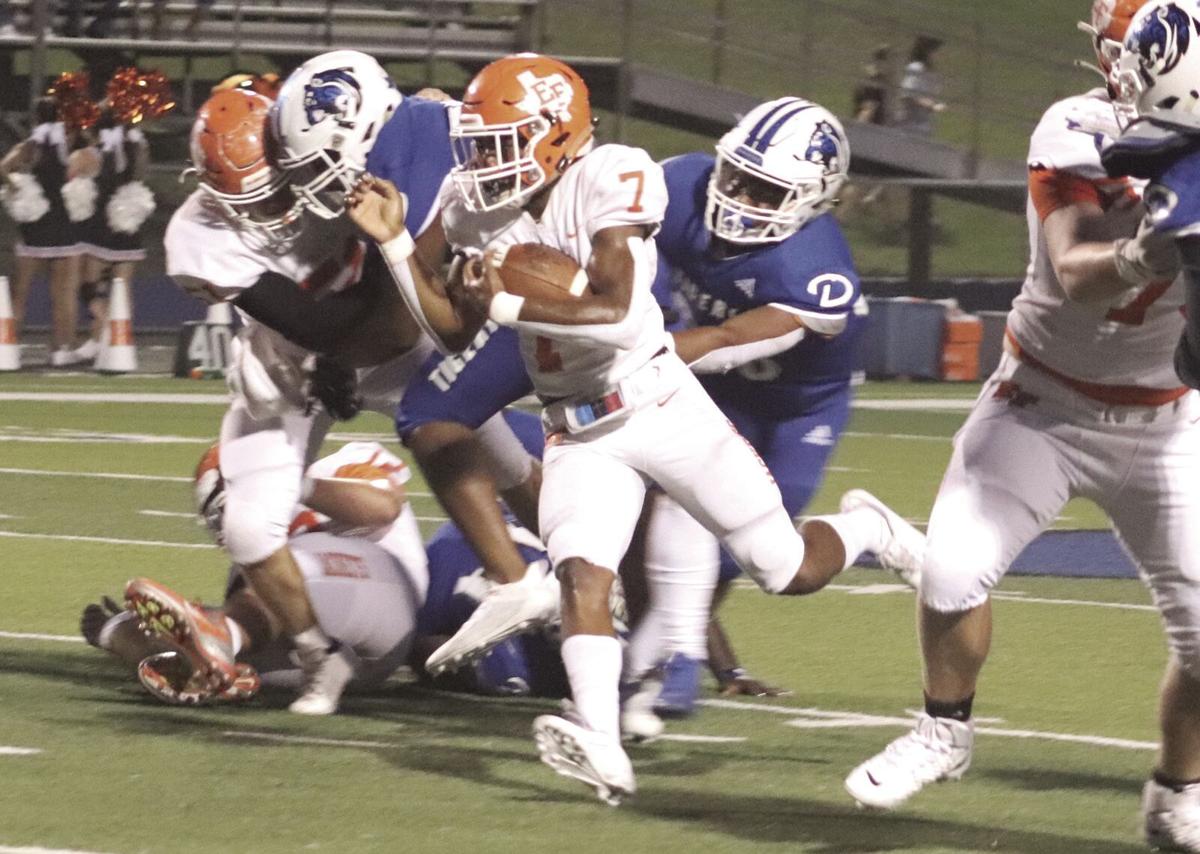 The Elysian Fields defense swarms over a Daingerfield ball carrier.

DAINGERFIELD – Friday night’s matchup between Elysian Fields and Daingerfield was a tale of two halves as most of the scoring was done in the first half.

The second half proved to be a defensive battle, and in the end, Daingerfield made the defensive stops it needed in order to come away with the 26-14 win on homecoming.

Both teams are now 2-1 after Friday’s contest.

The Yellow Jackets finished the night with 13 first downs and 321 yards of total offense, 190 of which came on the ground and 131 came through the air. Ryan Wilkerson went 10-of-18 for 131 yards and one touchdown. He found Braden Manning for a 72-yard touchdown. He also connected with Jackson Illingworth five times for 34 yards. William Goodnight led the Yellow Jackets’ rushing attack with 103 yards and one touchdown on 20 carries.

Daingerfield had 24 first downs on the night and came away with 200 rushing yards and 142 passing yards. Zaylon Jeter went 6-of-19 for 142 yards, two touchdowns and two interceptions. He also rushed 15 times for 72 yards and a touchdown. Braxton Jimmerson caught two passes for 79 yards and one touchdown and Cody Wright hauled in a 15-yard touchdown pass. Dee Lewis led the rushing attack with 93 yards and one touchdown on 10 carries.

The first score came on the third play of the game when Wilkerson connected with Manning who broke away from the Daingerfield secondary and went the distance for a 72-yard strike. Wilkerson tacked on the extra point to give his team an early 7-0 lead with 10:42 left in the first quarter.

It only took Daingerfield one offensive play and 13 seconds to find the end zone. Jeter found a wide-open Jimmerson who jogged in the rest of the way to complete the 59-yard touchdown pass. The Tigers were unable to convert the two-point conversion and trailed 7-6.

The Yellow Jackets were threatening to score and drove deep into Tiger territory but the Daingerfield defense forced a turnover on downs before the Elysian Fields defense repaid the favor on the next possession.

The first play of the second quarter was a 10-yard run from Goodnight to put the Yellow Jackets at the Daingerfield nine-yard line. Goodnight’s number was called on the next play as he went up the middle untouched for the nine-yard touchdown run. That spread Elysian Fields’ lead to 14-6 with 11:23 left in the first quarter.

A 12-yard run from Lewis put the Tigers into the end zone and within two points of the Dragons, making the score 14-12 with 9:49 remaining the first half.

Daingerfield got the ball into the end zone but no referees signaled touchdown because of an inadvertent whistle. A couple plays later, Jeter went up the middle on a one-yard quarterback sneak for the touchdown. Another two-point-conversion attempt failed but the Tigers held their first lead of the night, 18-14 as 6:44 remained until halftime.

Elysian Fields was just inches from the goal line as Wilkerson tried going up the middle but the ball came loose and was recovered by the Tigers. Daingerfield was unable to add to its lead before the halftime buzzer sounded, as the two teams went into the locker room with an 18-14 score.

The Tigers were threatening to drive before Manning intercepted a pass in the end zone to give the ball back to the EF offense at its own four-yard line. That drive quickly stalled after Daingerfield forced another turnover on downs. The Tigers’ next drive only lasted one play as Ty Kirkland picked off the pass to give his team’s offense another shot but the Yellow Jackets were forced to punt for the second time of the night.

Both teams went scoreless in the third quarter. Early in the fourth quarter, the Jackets were faced with fourth-and-three from the Daingerfield 16, Wilkerson found Wilkerson for exactly what they needed for the first down. A few plays later, the Jackets were faced with another fourth down but the Daingerfield defense made the stop in the backfield to force yet another turnover on downs.

The Yellow Jackets were unable to add to their score as they suffered their first loss of the year in a 26-14 final.

The Yellow Jackets are slated to return to action Friday when they play host to the Queen City Bulldogs in the district opener. The Tigers will travel to DeKalb for their district opener.