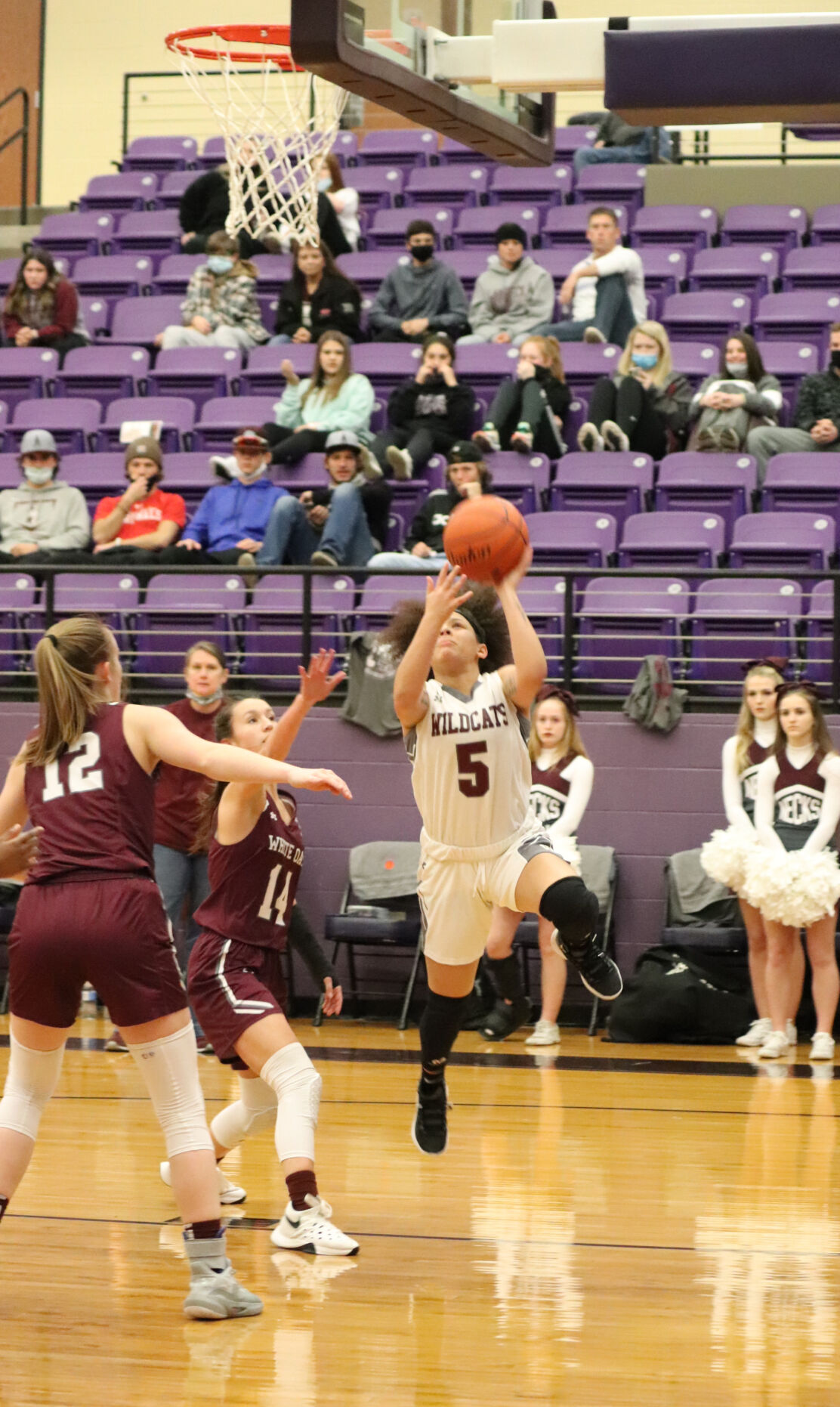 Waskom’s Sky Middlebrook goes up for a shot in Friday night’s win against White Oak. 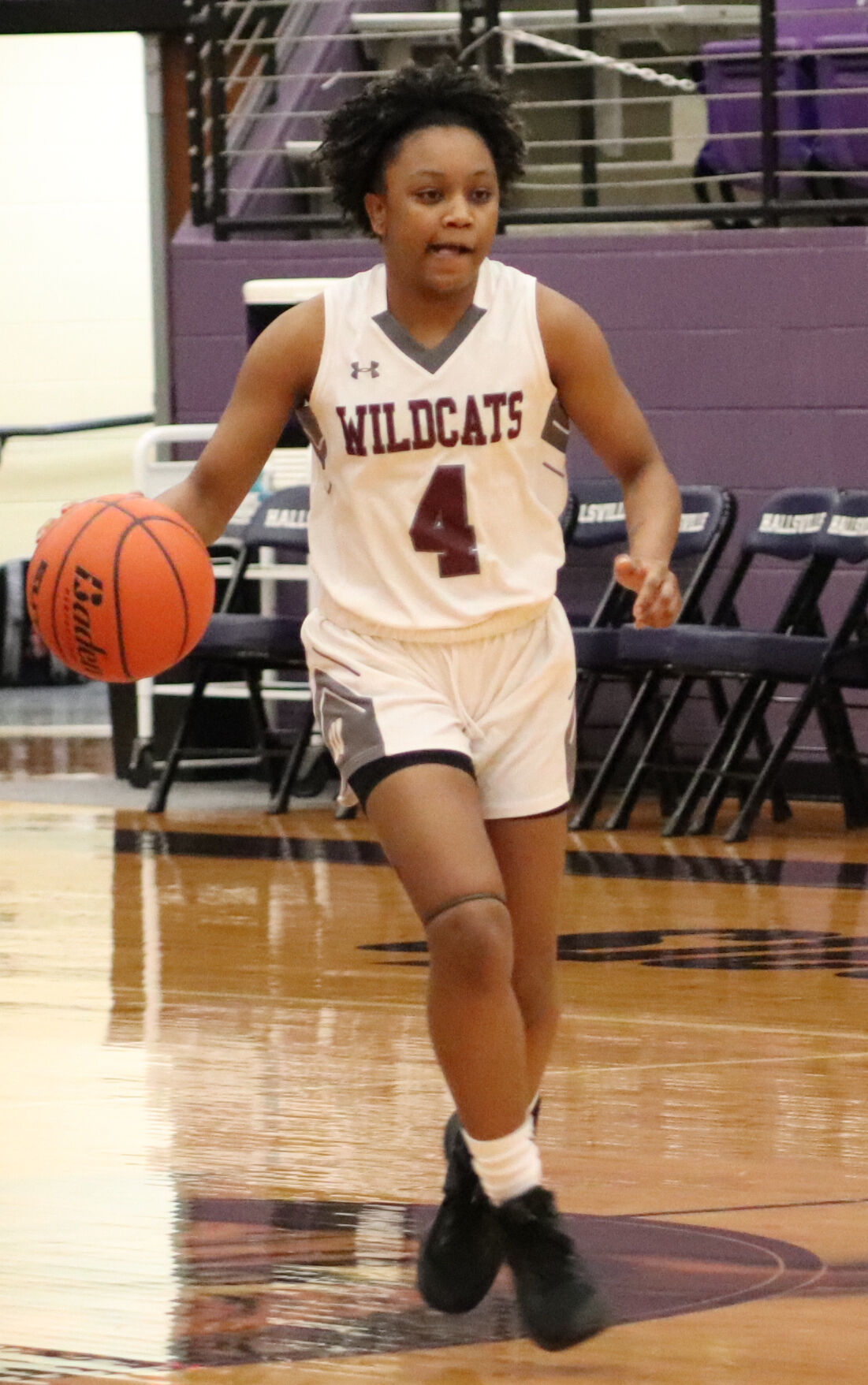 Waskom’s Sky Middlebrook goes up for a shot in Friday night’s win against White Oak.

Lady Wildcats come from behind to defeat Ladynecks, advance to next round

HALLSVILLE – After trailing by four points after each of the first two quarters, the Waskom Lady Wildcats jumped out in front of the White Oak Ladynecks and came away with a 55-40 victory to punch their ticket to the next round of the playoffs. Waskom advances with an overall record of 15-5 while White Oak’s season comes to an end with a final record of 11-11.

“I’m excited for them because it’s something that hasn’t been done in over a decade at Waskom High School. I’m excited that these kids have an opportunity to play in the postseason,” Waskom girls head basketball coach Jalena Sanders said. “The senior class has never been in the postseason for basketball so I think this is a big moment for them.”

Anna Iske and Alysa Hall each tossed in 15 points to lead the Ladynecks in scoring. Renee Cook scored the other 10 points.

Cook scored the first points of the night before buckets from Miles and Chatman gave Waskom a 4-2 lead. Cook then got her second bucket of the night to tie it back up at 4-4. Iske then drained a three and a two to give the Ladynecks a 9-4 lead and forced Waskom to call its first timeout with 4:29 left in the opening quarter. Layups from Chatman and Jeter put the Lady Wildcats within one point. Iske gave her team a little more separation with a three before Miles brought it back down to one when she rebounded a missed shot and put it back up for two. A turnaround jumper from Hall gave the Ladynecks a 14-10 lead after one quarter.

The second quarter started off with an and-one from Hall to bring the score to 17-10. Miles rebounded her own shot before putting it back up for two. Chatman tossed in a layup to make it a five-point game. Middlebrook went 2-for-2 from the free-throw line to put her team within one point. Iske added a free throw, followed by a field goal. A few plays later, a bucket from Chatman put Waskom within one point but Palmer scored the final points of the first half from three-point range to give White Oak a halftime lead of 23-19.

Hall scored the first two points of the second half from the foul line. After a free throw from Fields, Chatman scored on a layup to make it a one-possession game. Middle Brook then tied it up with a three from the corner. Iske gave the lead back to White Oak. Miles banked a shot off the glass to tie it up again, 27-27. Field threw up a shot that found its way into the net to give Waskom its first lead since leading 4-2. Middlebrook added to that lead with a three from the top of the key. Miles tossed in a shot from down low to extend Waskom’s run to 9-0. That scoring streak came to an end when Hall went 1-of-2 from the line. Isk rebounded the missed shot and put it back up for two to make it a four-point game. The next two possessions saw the two teams exchange buckets. Middlebrook scooped up a loose ball for the steal and tossed the ball up for the final points of the third quarter, making the score 38-32 in favor of the Lady Wildcats heading into the fourth quarter.

Fileds threw up a floater that went in for the first two points of the fourth. Middlebrook was on the receiving end of a wide-open pass as she scored on a layup to spread Waskom’s lead to double digits and forced White Oak to call timeout with 6:18 remaining in regulation. After the timeout, Middlebrook went 2-for-2 from the line. Cook added a field goal and two to bring it back to single digits but Waskom brought that lead back to 10 points when Chatman dished it off to Miles for the assist. Fields made it a 12-point game with a shot down low. Waskom continued adding to its lead, making it 52-38 and forcing White Oak to call timeout with 1:21 left in the fourth quarter. Miles tacked on a free throw before Chatman’s layup gave the Lady Wildcats their final points. Hal scored the last points of the game to make the final score 55-40.

“Defense,” Sanders said when asked what the difference between the two halves was. “The second half we went to a man-to-man, we put some pressure on the ball and my No. 2 (Jeter) did a really good job of aggravating their ball-handler and from there, I feel like everybody else bought into the defense. Defense is definitely what made the difference.”

Waskom will take on Winnsboro in the second round.