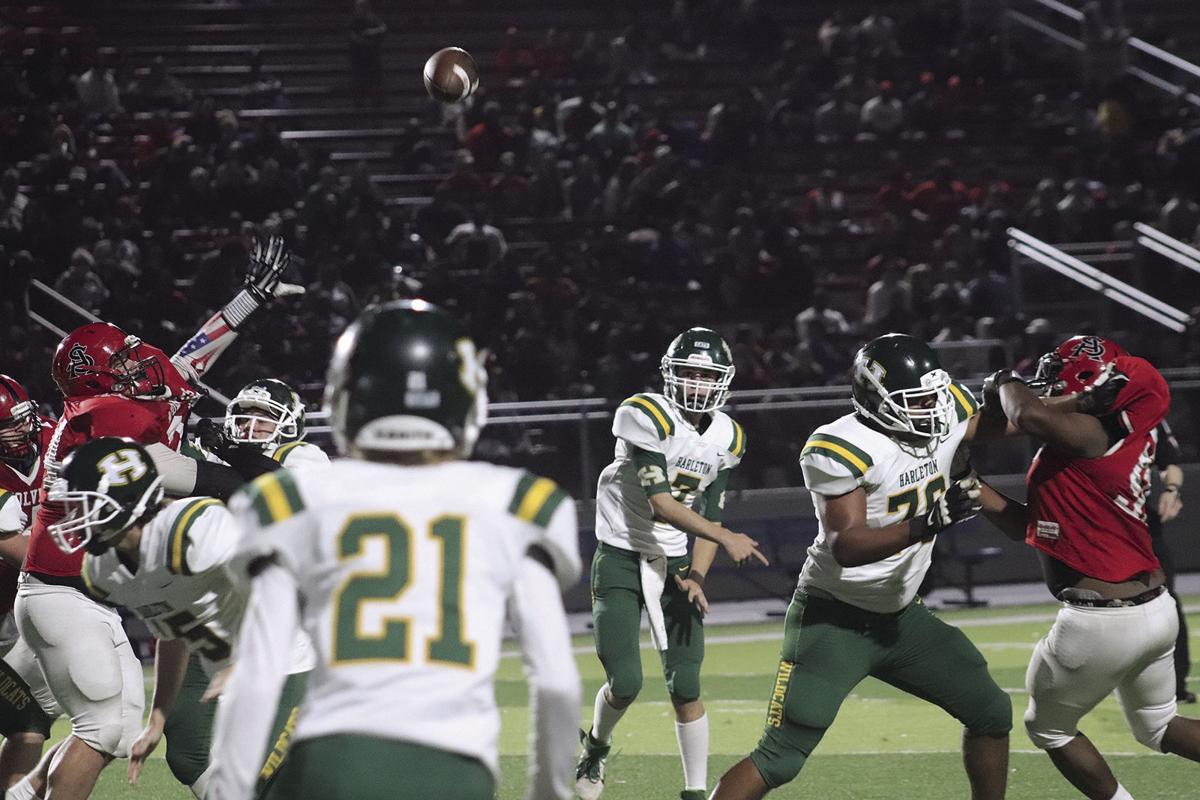 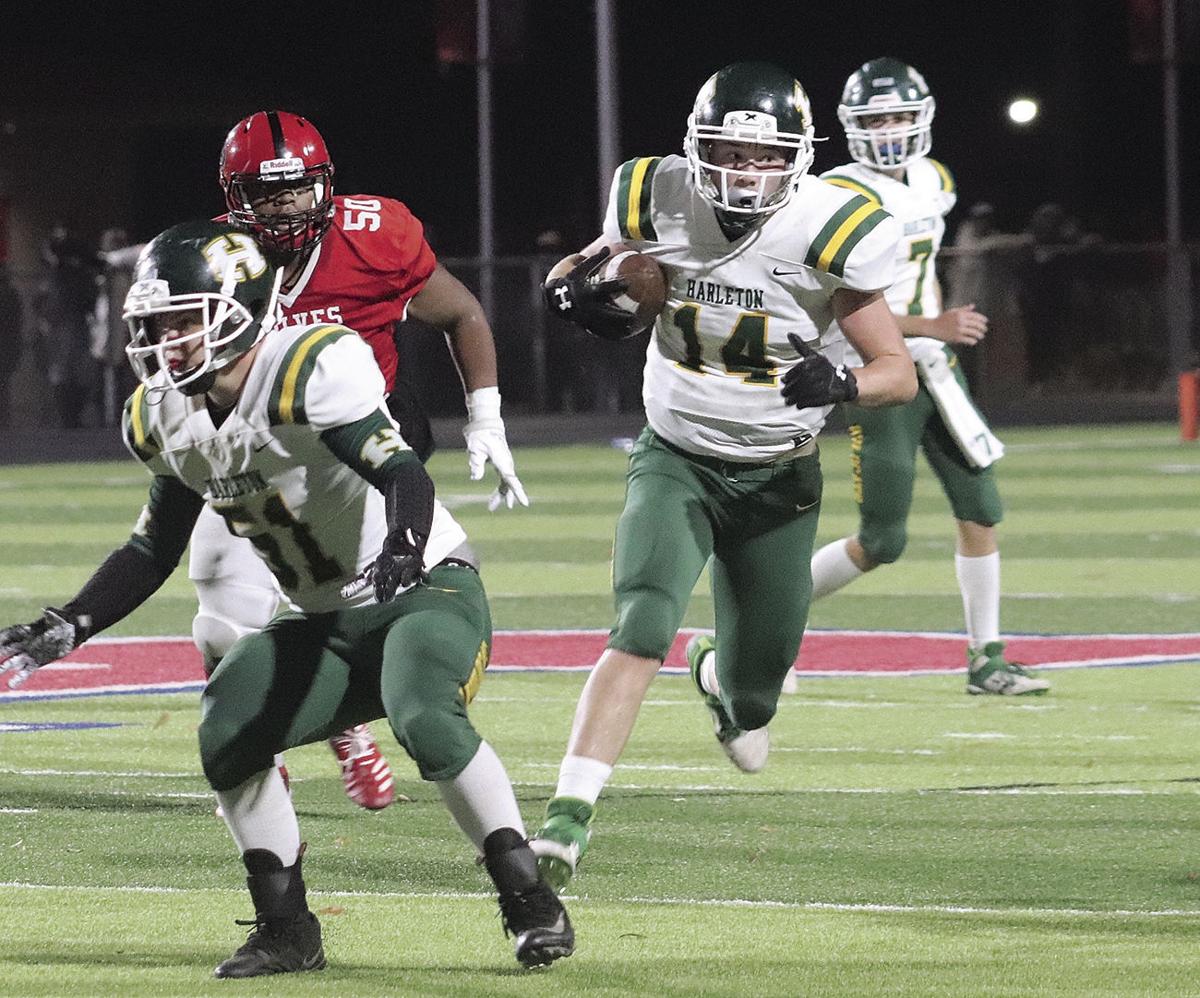 HENDERSON – Harleton’s football season came to an end Friday night when they lost to the undefeated San Augustine Wolves 47-21 in the 2A DI regional semifinals at Lion Stadium. The Wildcats end the season with a final record of 10-3 after going 1-9 in each of previous two seasons. San Augustine advances to the next round with a 12-0 record.

Harleton was without leading rusher Hunter Wallace who was injured a week ago and unable to recover from his injury. Wallace started the game but limped back to the sidelines and was taken out of the game after the Wildcats’ first drive and never made a return.

The Wildcats finished the night with 22 first downs and 363 yards total offense, 251 of which came on the ground and 112 came through the air.

Justin Davidson led the rushing attack with 21 carries for 87 yards. Grayson Handlin went 12-of-22 passing for 112 yards, two touchdowns and one interception. Kobe Fergus had three catches for 49 yards and one touchdown. Cole Ring caught two passes for 22 yards and a score.

The Wolves came away with 21 first downs, 304 rushing yards and 132 passing yards for a total of 436 yards offense.

Jayden Hicks went 7-of-12 passing for 132 yards and three touchdowns. He found DelMarquis Barnes three times for 79 yards and a touchdown. He also connected with Tijay Thomas four times for 53 yards and two scores.

Keorian Barnes led the rushing attack with 14 carries for 133 yards. Jarius Crane has two carries for 79 yards, including a 75-yard score.

Hicks found the end zone twice and had 26 yards on six carries. Dez Watts also scored a touchdown from a yard out.

The Wolves received the opening kickoff and drove into Harleton territory before the Wildcats came up with a loose ball on the second play of the game to give the ball to their offense for the first time of the night.

The Wildcats drained the clock and drove into San Augustine territory before the drive ended on a turnover on downs.

The Wolves drove 63 yards on an-eight-play drive that ended in a one-yard quarterback sneak from Hicks for the first points of the game.

The extra point from J. Saul Landeverde made it a 7-0 score with 2:03 left in the first quarter.

An interception from Thomas-Davis ended a Harleton drive with 23 seconds in the first quarter.

Hicks scored on another one-yard run with 6:11 remaining. That was the final score of the first quarter.

The Wildcats put a drive together and found themselves in the red zone but they up against the clock as time ran out before they could punch it into the end zone as the halftime buzzer sounded with Harleton trailing San Augustine 21-0.

After a 71-yard punt by San Augustine pinned the Wildcats just inches away from their own end zone.

They were forced to punt out of the end zone as it was blocked and went out of bounds for the safety. That gave the Wolves a 23-0 lead.

Hicks found Thomas-Davis for a 24-yard score to spread the Wolves’ lead to 29-0 with 1:36 left in the third quarter.

The next score came with 8:05 left in the game when the Wolves pulled out a page of the ’85 Bears’ playbook by handing it off to offensive lineman Watts who went up the middle for a one-yard score, making it a 35-0 ballgame.

The Wildcats avoided the shutout when Ferguson hauled a pass from Handlin and went the distance for a 43-yard touchdown pass. Jojo Clark tacked on the extra point to make it a 35-7 ballgame with 5:40 left in the fourth quarter.

It only took one play and 11 for the Wolves to strike again. Barnes hauled in a screen pass from Hicks and took it to the house for a 50-yard score, making it a 41-7 score with 5:29 left in fourth quarter.

Harleton scored again when Ring caught a pass from Handlin off a deflection in the end zone for the touchdown. That cut Harleton’s deficit to 41-14 with 3:07 remaining.

Once again, it only took San Augustine one play to score as Crane went the distance from 75 yards to spread his team’s lead to 47-14 with 2:55 to play.

The Wildcats scored the final points of the night. Following the touchdown, Cameron Postins returned the kickoff about 62 yards to set up a nine-yard run from Luke Wright with 2:38 left, making the final score 47-21.