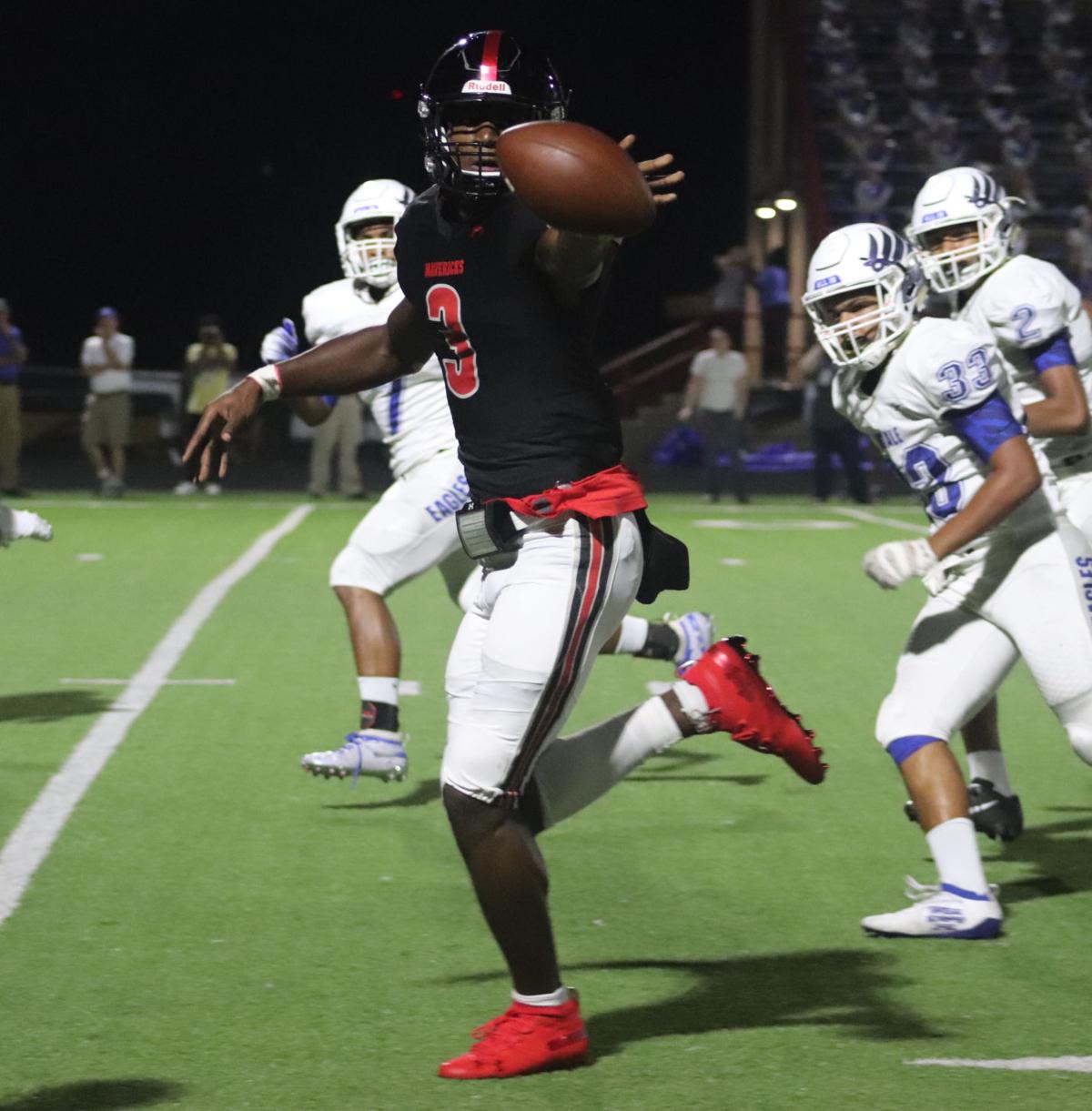 Marshall's Savion Williams pitches the ball to a teammate in the Mavericks' district opener against Lindale. 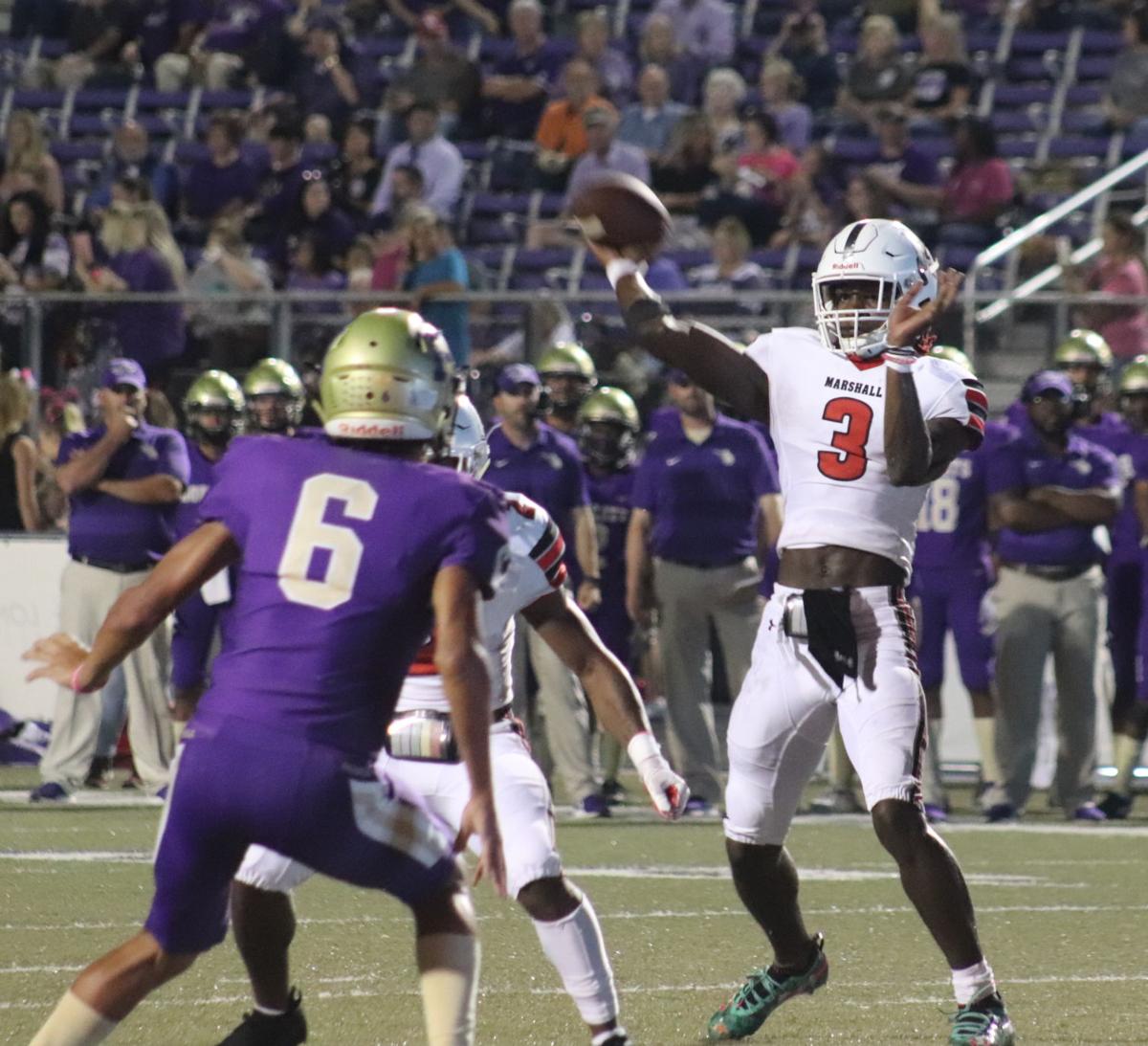 Savion Williams throws a pass down the field against Hallsville earlier this season.

Marshall's Savion Williams pitches the ball to a teammate in the Mavericks' district opener against Lindale.

Savion Williams throws a pass down the field against Hallsville earlier this season.

Savion Williams doesn’t do a lot of talking. In fact, when he switched positions from receiver to quarterback, one change the Marshall senior said he had to make was to talk more, to become a more vocal leader than before. He said he now uses a good mixture leadership by example and by being vocal.

“Yeah, I have to talk more,” Williams said.

More times than not, though, Williams lets his game do the talking for him. He obviously leads his team in rushing as he’s currently 40-of-76 for 949 yards, seven touchdowns and only one interception but he also leads the team’s rushing attack with 731 yards and 14 touchdowns on 69 carries.

“The last touchdown I ran against Whitehouse, 4th-and-26,” he said when asked what his favorite moment of the season so far has been.

“There are things he does that I would like to claim that we work on every day and that I coach him to do but I can’t just because he’s that good of an athlete,” Marshall athletic director and head football coach Jake Griedl said. “Savion has been a selfless football player for us this year. He didn’t necessarily embrace the quarterback position but he knew it’s what the team needed so he did it and once he made that commitment of being the team’s quarterback, he’s taken off with it and obviously, he’s had some incredible success. I’m very proud of him. The kids believe in him. The kids follow him and the kids look to him for his leadership. Obviously, he enjoys touching the ball every play and I think it’s changed him as a player and as an individual, which down the road, five years from now, he’ll look back at the season and realize how much better of a football player he has become because he had to play quarterback for us. He’s going to reap the benefits of that at the next level and hopefully the level beyond that.”

Prior to taking over at quarterback, Williams gave his commitment to University of Arkansas to play wide receiver for the Razorbacks. He and Griedl are confident the experience gained this year will help at the next level.

“When you play receiver, you’ve got to worry about the secondary,” Griedl explained. “When you play quarterback, you’ve got to worry about the O-line, the D-line, the linebackers, the secondary, your running backs, your receivers. The amount of football he has learned this year is only going to help him. He’s learned secondary play. He’s learned quarterback reads. He’s learned all that stuff. He’s learned how to throw certain routes, which will help him when he’s the guy running the route knowing where he needs to be because he knows where the quarterback needs to put the ball. He’s truly been a student of the game this year and because he clings onto the words that we coach him, he’s having the success that he is because he doesn’t know any different. I’m really impressed with him and obviously, his athleticism is unmatched. He’s been really fun to watch and really fun to coach. He’s a great young man.”

“Just knowing what route every receiver runs,” Williams said when asked what the biggest adjustment he had to make was. “I’ve got to know the protection up front and what the running backs do. I can see everything. I can see what the receivers are doing, what the offensive linemen are doing. It just makes it easier.

To say Williams played an instrumental part of the team’s success would be an understatement. A tough non-district schedule resulted in the Mavericks starting off the season at 0-3. He then took over the new role and helped lead the Mavs to six straight wins and a District 9-5A DII record of 6-0 to seal up Marshall’s third straight district championship. Williams and his Mavericks are looking to cap it off with the program’s 25th straight district victory dating back to 2016 as they play host to the Pine Tree Pirates. Williams said he expects the Pirates to throw the ball offensively and to line up in a man defense, adding the Mavs won’t be taking tonight’s opponent lightly.

“If we take Pine Tree lightly, teams in the future will look at us like, if we don’t think they’re good, they can run us over,” Williams said.

Tonight’s game will is also senior night but because the Mavericks have sealed up the district championship, they will play at home for the first round of the playoffs.

“I don’t feel it really, because next week, I’m still going to have another game here,” Williams said. “Next week, I’ll probably feel emotional.”

Tonight’s senior night game between Mavericks and Pirates is slated for a 7:30 p.m. kickoff at Maverick Stadium. Tickets will be on sale today from 7 a.m. until noon at the Y.A. Tittle Athletic Fieldhouse ticket window. Reserved seats cost $7 and $8. General admission is $6 in advance.