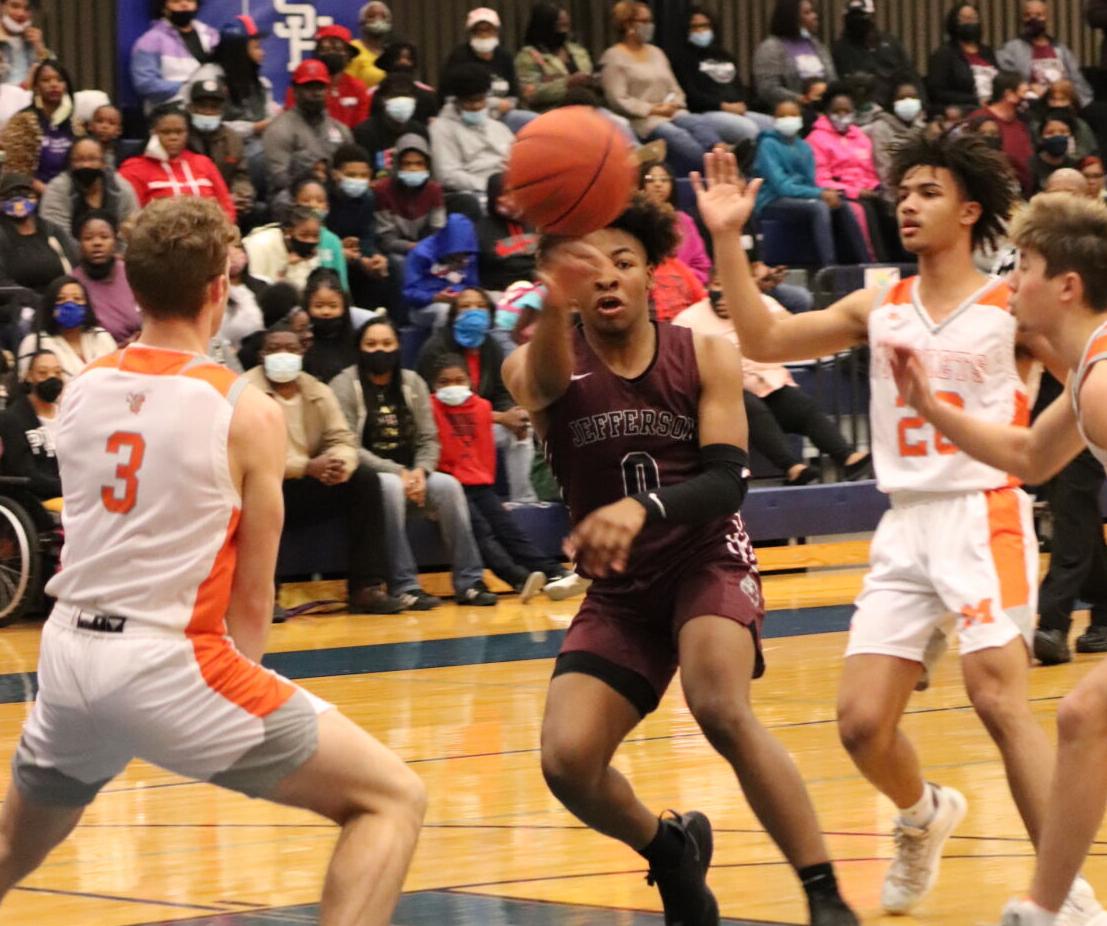 Jakardan Davidson dishes off a pass in Thursday night’s game against Mineola. 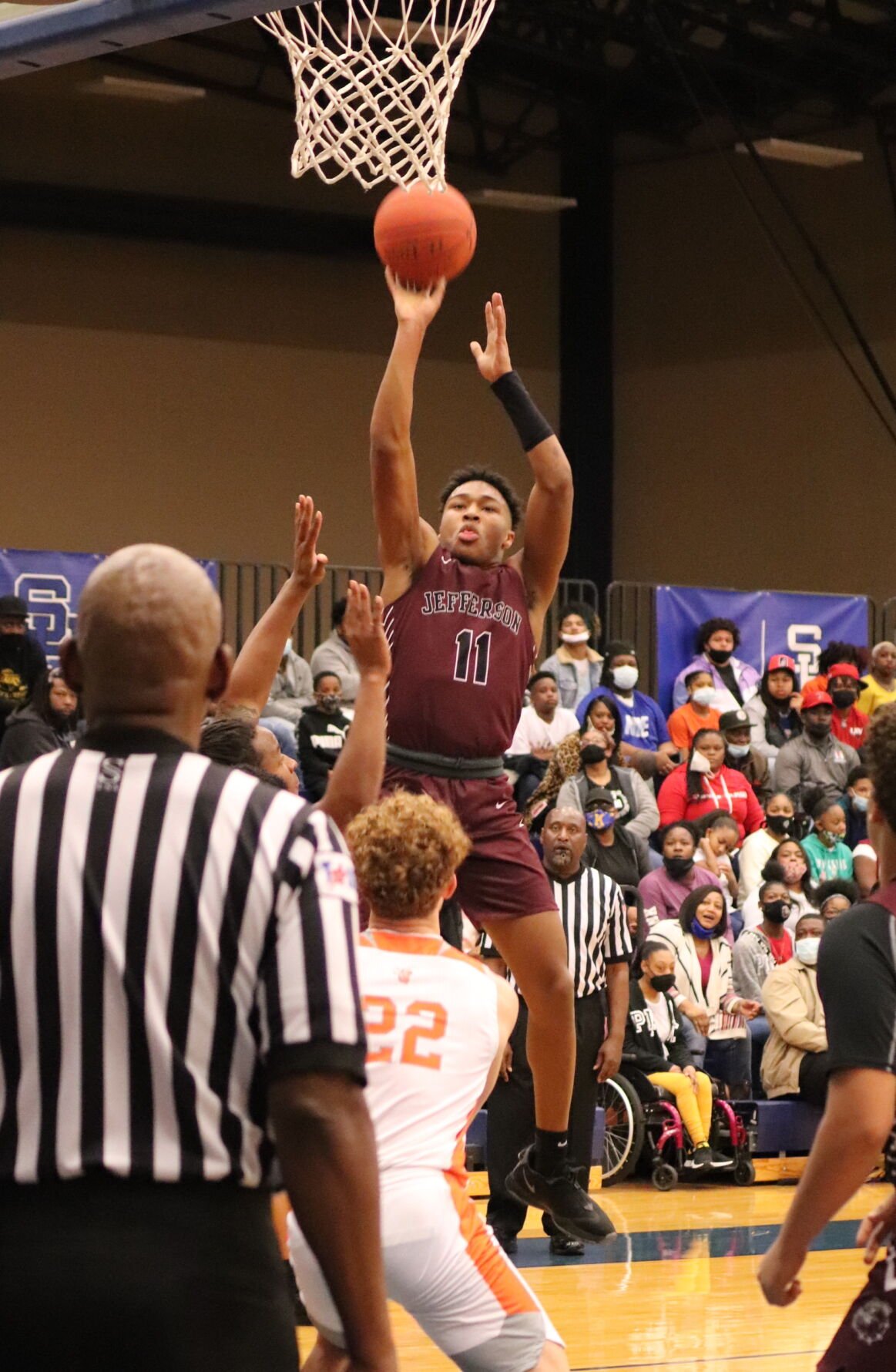 Josh Thomas goes up for a shot for the Bulldogs Thursday night.

Jakardan Davidson dishes off a pass in Thursday night’s game against Mineola.

Josh Thomas goes up for a shot for the Bulldogs Thursday night.

LONGVIEW – In a game halted briefly with just over a minute to play due to an altercation involving fans and spectators, Mineola advanced to the regional quarterfinal round of the playoffs with a 66-49 win over the Jefferson Bulldogs.

Neither team scored after the game was stopped with 1:03 showing on the clock and fans were asked to leave the arena.

TJ Moreland led the game in scoring with 23 points. Davison Pendergrass was next in line with 13. Johnah Fischer recorded 11 points. Tre Sneed threw in eight points while Andrew Stinchfield scored six and Aiden Steward had five.

Steward launched a three from the corner to score the first points of the game. Moreland added to that when he scooped up a loose ball for a steal and took I the other way for a layup. Thomas put the Bulldogs on the scoreboard with a jumper. Jefferson then knotted it up with a couple trips to the free-throw line before a layup from Thomas gave the Bulldogs their first lead of the night. It was a short-lived lead, however as Stinchfield fired a three from in front of the Jefferson bench.

Thomas gave the lead back to his team with a layup before Shepard added a free throw and a layup to make the score 12-8. Moreland went a combined 3-for-4 on two trips to the line to make it a one-point game. The final seconds were ticking as Shepard launched a shot from downtown to give Jefferson a 15-11 lead after one quarter.

Mineola made a pair of trips to the free throw line to score the first two points of the second quarter. Thomas drove the lane for a pair of points moments before Brasher added a bucket. Moreland tacked on a field goal on the other end to make the score 23-19.

Shepard drained three from in front of Mineola’s bench to add to the Bulldog’s lead. Moments later, a layup from Moreland cut the Yellow Jackets’ deficit to six points, 29-23 as Mineola called timeout.

Stinchfield was fouled on a three-point attempt and sent to the line where he went 3-for-3 to make it a one-possession game. Gardner made the final points of the first half to give Jefferson a 31-26 halftime lead.

Pendergrass scored the first four points of the second half to put Mineola within one point, forcing Jefferson to call timeout with 50 seconds into the third quarter. Pendergrass tipped in a missed shot to put the Jackets back into the lead, 32-31. Thomas’ layup a possession later resulted in another lead change just seconds before Moreland came away with an and-one, putting Mineola back in front, 35-33.

The two teams exchanged field goals before a free throw gave the Yellow Jackets a three-point lead. Shepard was sent to the line where he made the first and missed the second. Davidson was right there for the tip to tie the game up at 38 apiece. Fischer broke the tie with a field goal before Moreland made both of his shots on his next trip to the stripe before knocking down a jumper.

That gave Mineola a six-point lead, 44-38 heading into the fourth quarter.

Mineola started off hot in the fourth quarter and jumped to a 10-point lead as Jefferson called timeout. Davidson’s layup put the Bulldogs back within single digits. He then launched a three that found its way into the net to put the Bulldogs within five. Moreland threw up a floater into the net moments before Pendergrass gave his team a 10-point lead. An and-one from Moreland helped extend the Yellow Jackets’ run and their lead to 62-47.

Jefferson added a bucket but Mineola continued to pour it on before a fight broke out between the two teams and the game was called with 1:03 remaining. Fans were asked to leave, and the two teams finished the final 63 seconds in an empty gymnasium. Mineola missed a free throw and Jefferson got the ball and drained the clock as Mineola walked away with the 66-49 win.

Mineola will take on Atlanta in the next round.